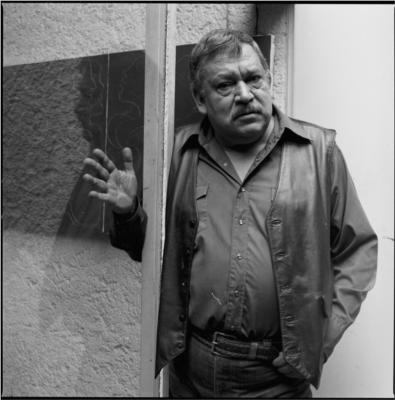 Pedro Coronel (b. Jerez, Zacatecas March 25, 1922- d. Mexico City May 23, 1985) was a Mexican sculptor and painter, part of the Generación de la Ruptura, bringing innovation into Mexican art in the mid 20th century. Coronel’s training was with artists of the Mexican muralism tradition, with influence from artists like Diego Rivera. This influence remained with the use of pre Hispanic themes and colors in his work. However, his artistic trajectory took him towards more use of color and more abstract forms in his work, due to influences from artists such as Rufino Tamayo. His work was exhibited and gained recognition in Mexico, the United States and Europe. Shortly before his death, he donated his considerable personal art collection to the people of Mexico, which was used to open the Museo Pedro Coronel in the city of Zacatecas.

Pedro Coronel was born on March 25, 1922 in Jerez, Zacatecas to an upper-middle-class family. His mother played the violin and his father played the clarinet and violin. On Sundays they would get together and play folk music. The youngest of his brothers and sisters, Rafael, became a well-known painter of Moors, monks and the elderly.

Pedro was a restless child, a dreamer and very rebellious. He did not like school, often skipping classes taking twelve years to finish his primary education. Instead, he preferred to go to the quarry and watch the workers carve out pieces of stone from the mountain. As a boy, he collected tops, marbles and puppets. This hobby would later evolve into a large collection of art from various parts of the world.

His interest in art led him to study at the Escuela Nacional de Pintura, Escultura y Grabado "La Esmeralda" when he was only thirteen, when the school had teachers such as Diego Rivera, José Clemente Orozco, Frida Kahlo and Francisco Zúñiga. Coronel forged friendships with Rivera, Zuñiga and Santos Balmori. He began by studying sculpture, but Santos Balmori’s influence encouraged him to paint. This led him to appreciate the uses of color.

As he began his art career, he visited Paris in 1946, deciding to make it his second home in the late 1940s through 1950s, dividing years half in Paris and half in Mexico City. In the 1960s, he was a teacher at La Esmeralda, residing mostly in Mexico but traveling frequently to Europe, Asian and the United States. During this time, he also worked with Mathias Goeritz, Rufino Tamayo and Pedro Friedeberg on the Hotel Camino Real in Mexico City.

Coronel has been characterized as having a strong and sometimes violent personality as well as making curt responses. However, he has also been characterized as honest and fair. He said “he who does not yell, he who does not tremble, had no right to live.” referring “life” in the sense of feeling. He said he feared death only because it would end his painting. He was briefly married to Amparo Dávila, a Mexican writer but his long-term eighteen-year relation was with his second wife, Réjane Lalonde.