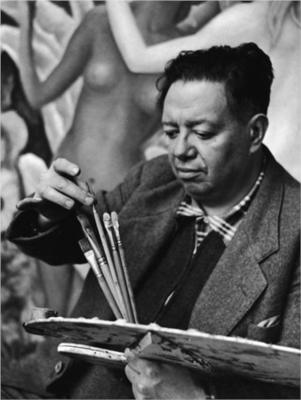 A Mexican muralist painter, Diego Rivera was an outspoken member of the Mexican communist party and husband to painter Frida Kahlo. Rivera began drawing at the age of three, one year after the death of his twin brother Carlos. His father built him a studio with chalkboard and canvas on the walls to keep him from drawing on the walls and furniture. At the age of ten, he studied at the Academy of San Carlos, and at the age of 21 was sponsored by the governor of Veracruz to study art in Europe. While in Europe, he traveled and studied in Madrid, Paris, and Italy, and befriended many of the famous Paris artists of the time, including Amadeo Modigliani, Ilya Ehrenburg, Chaim Soutine, Max Jacob, and Moise Kisling. He witnessed the birth of cubism, led by Pablo Picasso and Georges Braque, which he enthusiastically embraced, and was also inspired by the post-impressionism of Paul Cezanne.

Rivera returned to Mexico in 1921, and quickly became involved with a Mexican mural program sponsored by the Mexican government. His completed his first mural, Creation, at the National Preparatory School in Mexico City, armed with a pistol, to defend himself from right-wing students. Rivera’s paintings exemplify his unique style of large, simplified figures with bold colors, and an Aztec influence. Many of them dealt with Mexican society and the Mexican Revolution of 1910.

After painting a series of murals in Mexico, Rivera’s travels brought him to the Soviet Union to take part in the anniversary celebrations of the October Revolution, and later to the United States with his wife Frida Kahlo. Rivera was a notorious womanizer, and was married five times throughout his lifetime, twice to Kahlo. His radical political beliefs, attacks on organized religion and his dealings with left-wing assassins made him a controversial figure while he alive, but the quality of his artwork surpassed his personal beliefs, and continued to be a successful painter until his death.

Rivera was born in Guanajuato, Mexico, to a well-to-do family, the son of María del Pilar Barrientos and Diego Rivera Acosta. Diego had a twin brother named Carlos, who died two years after they were born. Rivera was said to have Converso ancestry (having ancestors who were forced to convert from Judaism to Catholicism). Rivera wrote in 1935: "My Jewishness is the dominant element in my life." Rivera began drawing at the age of three, a year after his twin brother's death. He had been caught drawing on the walls. His parents, rather than punishing him, installed chalkboards and canvas on the walls. As an adult, he married Angelina Beloff in 1911, and she gave birth to a son, Diego (1916–1918). Maria Vorobieff-Stebelska gave birth to a daughter named Marika in 1918 or 1919 when Rivera was married to Angelina (according to House on the Bridge: Ten Turbulent Years with Diego Rivera and Angelina's memoirs called Memorias). He married his second wife, Guadalupe Marín, in June 1922, with whom he had two daughters: Ruth and Guadalupe. He was still married when he met art student Frida Kahlo. They married on August 21, 1929 when he was 42 and she was 22. Their mutual infidelities and his violent temper led to divorce in 1939, but they remarried December 8, 1940 in San Francisco. Rivera later married Emma Hurtado, his agent since 1946, on July 29, 1955, one year after Kahlo's death.

Rivera was an atheist. His mural Dreams of a Sunday in the Alameda depicted Ignacio Ramírez holding a sign which read, "God does not exist". This work caused a furor, but Rivera refused to remove the inscription. The painting was not shown for nine years – until Rivera agreed to remove the inscription. He stated: "To affirm 'God does not exist', I do not have to hide behind Don Ignacio Ramírez; I am an atheist and I consider religions to be a form of collective neurosis."

From the age of ten, Rivera studied art at the Academy of San Carlos in Mexico City. He was sponsored to continue study in Europe by Teodoro A. Dehesa Méndez, the governor of the State of Veracruz. After arrival in Europe in 1907, Rivera initially went to study with Eduardo Chicharro in Madrid, Spain, and from there went to Paris, France, to live and work with the great gathering of artists in Montparnasse, especially at La Ruche, where his friend Amedeo Modigliani painted his portrait in 1914. His circle of close friends, which included Ilya Ehrenburg, Chaim Soutine, Amedeo Modigliani and Modigliani's wife Jeanne Hébuterne, Max Jacob, gallery owner Léopold Zborowski, and Moise Kisling, was captured for posterity by Marie Vorobieff-Stebelska (Marevna) in her painting "Homage to Friends from Montparnasse" (1962).