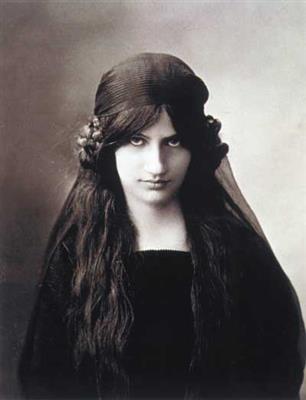 Jeanne Hébuterne (6 April 1898 – 25 January 1920) was a French artist, best known as the frequent subject and common-law wife of the artist Amedeo Modigliani.

Jeanne Hébuterne (6 April 1898 – 26 January 1920) was a French artist, best known as the frequent subject and common-law wife of the artist Amedeo Modigliani.

She was born in Meaux, Seine-et-Marne to a Roman Catholic family. Her father, Achille Casimir Hébuterne, worked at Le Bon Marché department store. A beautiful girl, she was introduced to the artistic community in Montparnasse by her brother André Hébuterne who wanted to become a painter. She met several of the then-starving artists and modelled for Tsuguharu Foujita. However, wanting to pursue a career in the arts, and with a talent for drawing, she chose to study at the Académie Colarossi. It was there in the spring of 1917 that Jeanne Hébuterne was introduced to Amedeo Modigliani by the sculptor Chana Orloff (1888–1968) who came with many other artists to take advantage of the Academy's live models. Jeanne began an affair with the charismatic artist, and the two fell deeply in love. She soon moved in with him, despite strong objection from her parents.

Described by the writer Charles-Albert Cingria (fr) (1883–1954) as gentle, shy, quiet, and delicate, Jeanne Hébuterne became a principal subject for Modigliani's art. In the spring of 1918, the couple moved to the warmer climate of Nice on the French Riviera where Modigliani's agent hoped he might raise his profile by selling some of his works to the wealthy art connoisseurs who wintered there. While they were in Nice, their daughter was born on 29 November. The following spring, they returned to Paris and Jeanne became pregnant again. By this time, Modigliani was suffering from tuberculous meningitis and his health, made worse by complications brought on by substance abuse, was deteriorating badly.

On 24 January 1920 Amedeo Modigliani died. Jeanne Hébuterne's family brought her to their home but Jeanne threw herself out of the fifth-floor apartment window two days after Modigliani's death, killing herself and her unborn child. Her family, who blamed her demise on Modigliani, interred her in the Cimetière de Bagneux. Nearly ten years later, the Hébuterne family finally relented and allowed her remains to be transferred to Père Lachaise Cemetery to rest beside Modigliani. Her epitaph reads: "Devoted companion to the extreme sacrifice."

Their orphaned daughter, Jeanne Modigliani (1918–84), was adopted by her father's sister in Florence, Italy. She grew up knowing virtually nothing of her parents and as an adult began researching their lives. In 1958, she wrote a biography of her father that was published in the English language in the United States as Modigliani: Man and Myth. ISBN 1-199-15698-1

It took more than thirty years before an art scholar persuaded the Hébuterne heirs to allow public access to Jeanne Hébuterne's artwork. In October 2000, her works were featured at a major Modigliani exhibition in Venice, Italy by the Fondazione Giorgio Cini. Unfortunately, it was revealed in January 2010 that the works presented at the exhibition were forged. Christian Parisot, the curator of the exhibition, had been accused by Hébuterne’s grandnephew of faking 77 drawings. He was sentenced to a two-year suspended sentence and a 50,000€ ($70,000) fine by a French court of appeals.