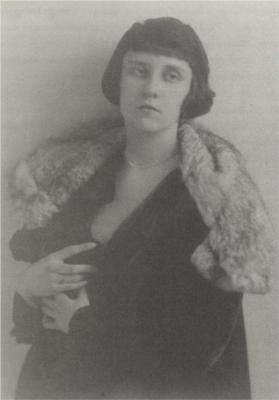 Prudence Heward (July 2, 1896 – March 19, 1947) was a Canadian painter principally known for her figure painting with "brilliant acid colours, sculptural treatment, and an intense brooding quality". She was a member of the Beaver Hall Group and a co-founder of the Canadian Group of Painters and the Contemporary Arts Society.

Born Efa Prudence Heward in Montreal, Quebec, Canada into a well-to-do family, Heward was the sixth of eight children and was educated at private schools. She showed an interest in art at a young age, possibly encouraged by her artistically-inclined mother and sister Dorothy, and started drawing lessons at age twelve at the Art Association of Montreal school with William Brymner and Maurice Cullen.

During World War I, Heward lived in England where her brothers served in the Canadian Army while she served as a volunteer with the Red Cross. Returning to Canada at war's end, she continued her painting and joined the Beaver Hall Hill Group. In 1924 her works were given their first public showing at the Royal Canadian Academy of Arts in Toronto, Ontario. However, it was still an era when women artists were given little credibility and it wasn't until 1932 that Heward's first solo exhibition came at the Scott Gallery in Montreal.

Wanting to refine her skills, and drawn to the great gathering of creative genius in the Montparnasse Quarter of Paris, France, between 1925 and 1926 Prudence Heward lived and painted in Paris. While studying at the Académie Colarossi, she frequented Le Dome Café in Montparnasse, the favorite haunt of North American writers and artists and the place where Canadian writer Morley Callaghan came with his friends Ernest Hemingway and F. Scott Fitzgerald.

While in Paris, Heward met Ontario painter Isabel McLaughlin with whom she became friends and would later join with her and other artists on nature painting trips. In 1929 her career got a major boost when her painting, Girl on a Hill, won the top prize in the Governor General Willingdon competition organized by the National Gallery of Canada.

She was invited to exhibit with the Group of Seven and through it became friends with A. Y. Jackson with whom she would go on sketching excursions along the Saint Lawrence River. She did a number of landscapes, with a particular attachment for Quebec's Eastern Townships.

She joined the executive committee of The Atelier: A School of Drawing Painting Sculpture in 1931. During the Second World War she designed war posters. In 1933, Prudence Heward co-founded the Canadian Group of Painters, but her struggle with asthma and other health problems eventually slowed her down. A 1939 automobile accident curtailed her abilities further but she still produced some outstanding portraits until 1945 when her health had deteriorated to the point where she had to give up painting. She died two years later, while seeking medical treatment in Los Angeles, California.

Though Heward also painted landscapes and still lifes, she was primarily a painter of human subjects. As Julia Skelly points out in Prudence Heward: Life & Work, Heward preferred the term “figures” to portraits, and most of her figurative paintings are of women who often return the viewer’s gaze, and who are "realistically rendered rather than unrealistically idealized." These include nude subjects which was sometimes controversial in the 1930s. Art historian Charmaine Nelson has critically examined Heward’s depictions of black women she painted.