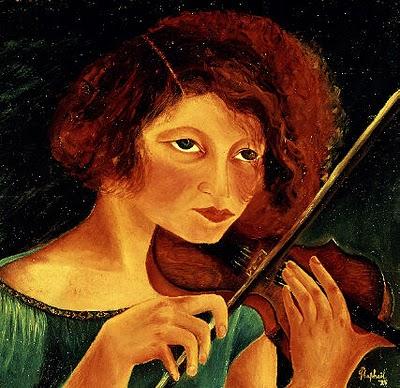 Antonietta Raphaël (1895 – 5 September 1975) was an Italian sculptor and painter of Jewish heritage and Lithuanian birth, who founded the Scuola Romana (Roman School) movement together with her husband Mario Mafai. She was an artist characterised by a profound anti-academic conviction, also affirmed by her sculptures which, especially after World War II, dominated her output. They highlighted the tender and vibrant carnality present in stone, with works such as Miriam dormiente (Sleeping Miriam) and Nemesis.

A rabbi's daughter, Raphael moved to London with her mother after her father's death. There she attended the British Museum, and came to know Jacob Epstein and Ossip Zadkine, the renowned French sculptor of Russian origin and member of the Expressionist movement. However, Antonietta in those days concentrated on studying music, and eventually graduated in piano at the Royal Academy of Music and teaching solfeggio in the East End.

At her mother's death in 1919, she moved to Paris and in 1924 to Rome. In 1925 Antonietta attended the Accademia di Belle Arti, befriended artist Mario Mafai and went to live with him, in a long-lasting relationship. They had three daughters: Miriam (1926), a journalist, partner of Communist politician Giancarlo Pajetta; Simona (1928) member of the Italian Senate and author; and Giulia (1930), a scenographer and costume designer.

In 1927, Raphael and Mafai moved to an apartment in via Cavour in Rome which quickly became a meeting point for literati including Giuseppe Ungaretti and Leonardo Sinisgalli, as well as young artists including Scipione, Renato Marino Mazzacurati, and Corrado Cagli. This represented the birth of the Scuola Romana.

In 1929, Raphael exhibited for the first time at I Sindacale of Lazio, supported by art historian Roberto Longhi. In 1930 she and Mafai went to Paris, and there she began to concentrate on sculpture rather than painting. In 1932 she was in London and met Jacob Epstein. She then moved permanently to Rome and started working on her masterpiece Fuga da Sodoma (Escape from Sodom), working as a guest of sculptor Ettore Colla in his studio for a year. Between 1936 and 1938 she exhibited at the Sindacali. Her plastic shapes, during this phase, show a lack of influence from any Italian sculpture movement of the period, but there are distinct references to Emile-Antoine Bourdelle. Due to the Fascist racial laws and their implementation, Raphael escaped to Genoa together with her husband and daughters. The family was assisted and kept safe by art collector Emilio Jesi and philanthropist Alberto Della Ragione.

During World War II (from 1943 to 1945) Raphael stayed in Rome with her daughter Giulia, then moved again to work in Genoa with an influential group of older sculptors, though one that did not have a common style. This included Edoardo Alfieri, Nanni Servettaz, Raimondi, Camillo Maine, Lorenzo Garaventa, Sandro Cherchi, Agenore Fabbri, Roberto Bertagnin (brother-in-law of Arturo Martini) and Luigi Navone.

In 1948, Raphael exhibited at the Biennale di Venezia, after a difficult period of financial restrictions. As from 1952 art critics began fully appreciating Raphael's work and selected pieces were exhibited at the Galleria dello Zodiaco in Rome. In 1956 she travelled to China, where she exhibited in Beijing her artwork together with Aligi Sassu, Agenore Fabbri, Giulio Turcato and others - continuing other exhibitions throughout Europe, Asia, and the Americas. At the 8th Rome Quadriennale of 1959-1960, dedicated to the Scuola Romana, many of her works were presented to the public, placing her among the greater exponents of this School. By this stage, Raphael was working almost exclusively on sculpture, leaving aside painting.