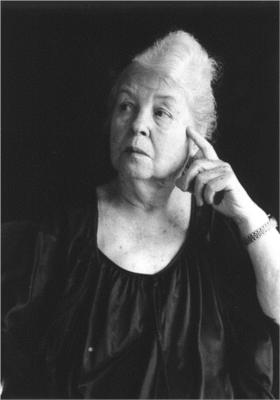 Alice Neel (January 28, 1900 – October 13, 1984) was an American visual artist, who was known for her portraits depicting friends, family, lovers, poets, artists and strangers. Her paintings have an expressionistic use of line and color, psychological acumen, and emotional intensity. Neel was called "one of the greatest portrait artists of the 20th century" by Barry Walker, curator of modern and contemporary art at the Museum of Fine Arts, Houston, which organized a retrospective of her work in 2010.

Alice Neel was born on January 28, 1900, in Merion Square, Pennsylvania to George Washington Neel, an accountant for the Pennsylvania Railroad, and Alice Concross Hartley Neel. In mid-1900, her family moved to the rural town of Colwyn, Pennsylvania. Young Alice was the fourth of five children, with three brothers and a sister. Her oldest brother, Hartley, died of diphtheria shortly after she was born. He was only eight years old. She was raised into a straight-laced middle-class family during a time when there were limited expectations and opportunities for women. Her mother had said to her, "I don't know what you expect to do in the world, you're only a girl.

She met an upper-class Cuban painter in 1924, Carlos Enríquez, at the Chester Springs summer school run by PAFA. The couple married on June 1, 1925, in Colwyn, Pennsylvania. Neel soon moved to Havana to live with Enríquez's family. In Havana, Neel was embraced by the burgeoning Cuban avant-garde, a set of young writers, artists and musicians. In this environment Neel developed the foundations of her lifelong political consciousness and commitment to equality. Neel later said she had her first solo exhibition in Havana, but there are no dates or locations to confirm this. In March 1927, Neel exhibited with her husband in the XII Salon des Bellas Artes. This exhibition also included Eduardo Abela, Victor Manuel García Valdés, Marcelo Pogolotti, and Amelia Pelaez who were all part of the Cuban Vanguardia Movement During this time, she had seven servants and lived in a mansion.