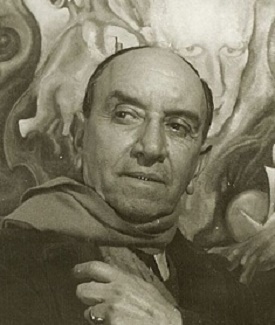 Roberto Montenegro Nervo (February 19, 1885 in Guadalajara – October 13, 1968 in Mexico City) was a painter, muralist and illustrator, who was one of the first to be involved in the Mexican muralism movement after the Mexican Revolution. His most important mural work was done at the former San Pedro and San Pablo monastery but as his work did not have the same drama as other muralists, such as Diego Rivera, he lost prominence in this endeavor. Most of his career is dedicated to illustration and publishing, portrait painting and the promotion of Mexican handcrafts and folk art.

Roberto Montenegro Nervo was born on February 19, 1885 in Guadalajara. His parents were Colonel Ignacio L Montenegro and María Nervo, aunt of poet Amado Nervo. Montenegro had four sisters: Rosaura, Ana, Eva and María Eugenia and one brother, Arturo. The family was one of the beneficiaries of the Porfirio Díaz regime, leaving for the United States when the Mexican Revolution broke out in 1910. They returned in the mid 1920s. Little is known of Montenegro's childhood. One photo exists of him as a teenager in a park with Jorge Enciso and Luis Castillo Ledón. In interviews he only talked about ordinary things from this time such as going to buy pastry and admiring the colors and forms of ordinary things around him. His education began at a school for boys where he had his first experience with drawing. This led to clashes with Italian Felix Bernardelli, who had a painting and music school in Guadalajara and introduced Montenegro to Art Nouveau.

He arrived to Mexico City in 1903, sent by his father to study architecture. Through his cousin Amado Nervo, he was able to meet many of the social elite of Mexico City including José Juan Tablada, Manuel de la Parra and Justo Sierra. From 1904 to 1906 he studied drawing and history at the Academy of San Carlos. His teachers included Leandro Izaguirre, Germán Gedovius and Alberto Fuster and his classmates were Diego Rivera, Ángel Zárraga, Francisco Goitia and Saturnino Herrán. He became familiar with Japanese art whose influence can be seen some of his illustrations for Revista Moderna. In 1906, he and Diego Rivera were finalists for a chance to go to Europe. The decision was made by coin toss with Montenegro winning. But Rivera would go months later. Montenegro was first in Madrid, studying at the Academy of San Fernando under engraver Ricardo Baroja. He became a fanatic of the Prado Museum studying the works of El Greco, Goya and Ignacio Zuloaga y Zabaleta.

From 1907 to 1910 he was in Paris where he had his first contact with Cubism, meeting Picasso, Georges Braque and Juan Gris . Despite this, he did not have a Cubist period in his work. For two years he studied in Paris as the student of Colin Cowrstuos and exhibited his work in the city. He also traveled to London and Italy. He returned briefly to Mexico in 1910 but by 1913 he was back in Paris, for another six years, studying at the École nationale supérieure des Beaux-Arts and collaborating with Rubén Darío for a magazine called Revista Mundial. When World War I broke out in 1914, he moved to Barcelona then to Mallorca accompanied by a painter named Gandara, where he painted and also made a living fishing. He also met painter Hermen Anglada Camarasa there.