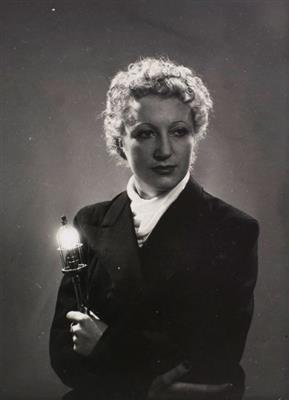 Jacqueline Lamba (17 November 1910 – 20 July 1993) was a French painter and surrealist artist. She was married to the surrealist André Breton.


Lamba was born in the Paris suburb of Saint-Mandé, on 17 November 1910 (contrary to at least one source she was not American). Her mother was a talented and well read woman who had once intended entering medical school, but instead was persuaded into the common woman’s role as a housewife. She always spoke highly of her father as well, whom she never had the chance to get to know very well. Her father, José Lamba, died in an automobile accident in 1914, when Lamba was three years old, and her mother, Jane Pinon, died of tuberculosis in 1927. Jacqueline Lamba's love for art began as a little girl growing up in Paris and frequently visiting the Louvre with her mother and sister.(Grimberg, p5) At the Palais Galliera, she saw exhibitions of decorative arts, printed fabrics, and painted paper. This delighted her and proved to be decisive in her formation as a visual artist.(Grimberg, p5)


Light was very important to Jacqueline, as she often said,


During Lamba's early life, and into late adolescence, she had worn pants, cropped her hair and referred to herself as “Jacko.” This nickname and change in appearance seemed to have been the result of her parent's disappointment after receiving a girl at birth, Lamba, and not a boy. Lamba was well read and had very educated opinions. However, she also had a temper that earned her the nickname “Bastille Day.” After attending the Ecole de L’Union Central des Art Decoratifs from 1926 to 1929, she worked as a textile and paper designer as well as in advertising for multiple companies before becoming a painter due to her inspiration drawn from other artists, such as Maurice Denis. Jacqueline Lamba would eventually become known for being a painter and draughtswoman later in life.


While attending the Ecole des Arts Décoratifs, an art university, she joined the French Communist Party. Following her mother's death, Lamba moved into a "Home for Young Women," run by nuns, on the Rue de l'Abbaye. During this time she supported herself by doing decorative designs for various department stores. After graduating from the Ecole des Arts Decoratifs it was suggested to her, by a cousin, that she should read a book by André Breton, the leader of Surrealism. After reading some of his books she exclaimed, “I was just astonished, it was not the surrealism that interested me. It was what Breton was saying, because he was sayings things that affected me, exactly what I was thinking, and I had no doubt that we were going to meet one way or another.” (Grimberg, p6)


In 1925, she entered the Ecole des Arts Décoratifs from which she graduated in 1929. Here, she met fellow female surrealist Dora Maar, who later stated: "I was closely linked with Jacqueline. She asked me, 'where are those famous surrealists?' and I told her about Café de la Place Blanche". Lamba then began to frequent the café and, on 29 May 1934, met Breton, whom she would meet for the second time after one of her performances as a nude underwater dancer at the Coliseum on rue Rochechouart. Breton later wrote about this encounter in his book titled, Mad Love, in which he described Lamba as a "scandalously beautiful" woman. They were married in a joint ceremony with Paul Éluard and Nusch Éluard, three short months after the night at the Café de la Place Blanche, and the sculptor Alberto Giacometti served as their best man. She would continue to appear frequently in the poetry of Breton throughout the rest of their relationship.