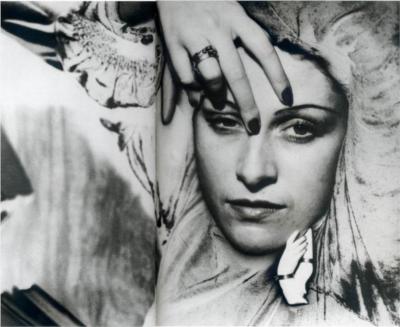 Henriette Theodora Markovitch, pseudonym Dora Maar (22 November 1907 – 16 July 1997), was a French photographer, painter, and poet. She was a lover and muse of Pablo Picasso.

Henriette Theodora Markovitch was the only daughter of Joseph Markovitch (1875–1969), a Croatian architect who studied in Zagreb, Vienna, and then Paris where he settled in 1896, and of his spouse, Catholic-raised Louise-Julie Voisin (1877–1942), originally from Cognac, France.

In 1910, the family left for Buenos Aires where the father obtained several commissions including for the embassy of Austria-Hungary; His achievements earned him the honor of being decorated by Emperor Francis Joseph I, even though he was "the only architect who did not make a fortune in Buenos Aires. "

In 1926, the family returned to Paris. Dora Maar, a pseudonym she chose, took courses at the Central Union of Decorative Arts and the School of Photography. She also enrolled at the École des Beaux-Arts and the Académie Julian which had the advantage of offering the same instruction to women as to men. Dora Maar frequented André Lhote's workshop where she met Henri Cartier-Bresson.

While studying at the École des Beaux-Arts, Maar met fellow female surrealist Jacqueline Lamba. About her, Maar said, 'I was closely linked with Jacqueline. She asked me, “where are those famous surrealists?" and I told her about cafe de la Place Blanche.' Jacqueline then began to frequent the cafe where she would eventually meet André Breton, whom she would later marry.

When the workshop ceased its activities, Dora Maar left Paris, alone, for Barcelona and then London, where she photographed the effects of the economic depression following the Wall Street Crash of 1929 in the United States. On her return, and with the help of her father, she opened another workshop at 29 rue d'Astorg, (8th arrondissement of Paris).

In 1935 she was introduced to Pablo Picasso and she became his companion and his muse. She took pictures in his studio at the Grands Augustins and tracked the latter stages of his work, Guernica. She later acted as a model for his piece titled Monument à Apollinaire., a tribute to the late poet.

Maar’s earliest surviving photographs were taken in the early 1920s with a Rolleiflex camera while on a cargo ship going to the Cape Verde Islands.

At the beginning of 1930, she set up a photography studio on rue Campagne-Première (14th arrondissement of Paris) with Pierre Kéfer, photographer, and decorator for Jean Epstein's 1928 film, The Fall of the House of Usher. In the studio, Maar and Kefer worked together mostly on commercial photography for advertisements and fashion magazines.

She met the photographer Brassaï with whom she shared the darkroom in the studio. Brassai once said that she had, “bright eyes and an attentive gaze, a disturbing stare at times.”

Dora Maar also met Louis-Victor Emmanuel Sougez, a photographer working for advertising, archeology and artistic director of the newspaper L'Illustration, whom she considered a mentor.

In 1932, she had an affair with the filmmaker Louis Chavance.
Dora Maar frequented the October group, formed around Jacques Prévert and Max Morise after their break from surrealism.