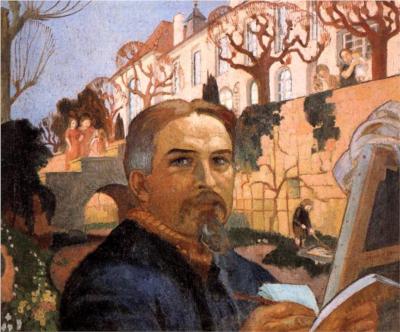 Maurice Denis (French: [dəni]; 25 November 1870 – 13 November 1943) was a French painter, decorative artist and writer, who was an important figure in the transitional period between impressionism and modern art. He was associated with Les Nabis then the Symbolist movement, and then with a return to neo-classicism. His theories contributed to the foundations of cubism, fauvism, and abstract art. Following the First World War, he founded the Ateliers d'Art Sacré (Workshops of Sacred Art), decorated the interiors of churches, and worked for a revival of religious art.

Maurice Denis was born 25 November 1870, in Granville, Manche, a coastal town in the Normandy region of France. His father was of modest peasant origins; after four years in the army, he went to work at the railroad station. His mother, the daughter of a miller, worked as a seamstress. After their marriage in 1865, they moved to Saint-Germain-en-Laye in the Paris suburbs. His father was employed in the offices the administration of the Western Railroads in Paris.

Maurice was an only child. From an early age, his passions were religion and art. He began keeping a journal in 1884 at the age of thirteen. In 1885 he recorded in his journal his admiration for the colors, candle light and incense of the ceremonies at the local church. He frequented the Louvre, and admired especially the works of Fra Angelico, Raphael and Botticelli. At the age of fifteen he wrote in his journal, "Yes, I must that I become a Christian painter, that I celebrate all the miracles of Christianity, I feel that is what is needed." In 1887 he discovered a new source of inspiration, the works of Puvis de Chavannes.

Denis was accepted as a student at one of the most prestigious Paris schools, the Lycée Condorcet, where he excelled at philosophy. However, he decided to leave the school at the end of 1887 and in 1888 enrolled in Académie Julian to prepare for the entrance examination to the École des Beaux-Arts in Paris. There he studied with the painter and theorist Jules Joseph Lefebvre. He passed the entrance examination for the Beaux-Arts in July 1888, and passed another examination in November to receive his baccalaureate in philosophy.

At the Académie Julian, his fellow students included Paul Sérusier and Pierre Bonnard, who had shared ideas about painting. Through Bonnard he met additional artists, including Édouard Vuillard, Paul Ranson, Ker-Xavier Roussel and Hermann-Paul. In 1890 they formed a group which they called the Nabis, taken from "Nabi"—Hebrew for "Prophet". Their philosophy was based upon the philosophy of positivism, and the writings of Auguste Compte and Hippolyte Taine. I rejected naturalism and materialism in favor of something more idealistic. Denis described it in 1909: "Art is no longer a visual sensation that we gather, like a photograph, as it were, of nature. No, it is a creation of our spirit, for which nature is only the occasion."

For his technique, Denis was first drawn toward the neoimpressionist style of Seurat, but rejected it as too scientific. In 1889, Denis was captivated by an exposition of works of Gauguin and his friends at the Cafe Volponi, on the edge of the Paris Universal Exposition of 1889. Recalling it later, Denis wrote, "What amazement, followed by what a revelation! In place of windows opening on nature, like the impressionists, these were surfaces which were solidly decorative, powerfully colorful, bordered with brutal strokes, partitioned." The work of Gauguin had an immediate effect on Denis' work. The brightly colored forms of Gauguin's Vache au-dessus du gouffre first shown in 1889, appeared in an October 1890 work by Denis, Taches du soleil sur la terrace, and later in Denis' Solitude du Christ (1918).[10]