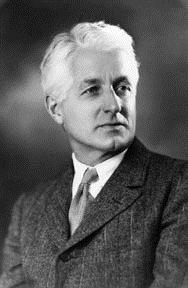 Maxfield Parrish (July 25, 1870 – March 30, 1966) was an American painter and illustrator active in the first half of the 20th century. He is known for his distinctive saturated hues and idealized neo-classical imagery.

Born in Philadelphia, Pennsylvania, he was the son of painter and etcher Stephen Parrish. His mother was Elizabeth Bancroft. He began drawing for his own amusement as a child. He was raised in a Quaker society. His given name was Frederick Parrish, but he later adopted the maiden name of his paternal grandmother, Maxfield, as his middle name, and later as his professional name. Young Parrish's parents encouraged his talent. In 1884, his parents took Parrish to Europe. He toured England, Italy, and France. Parrish was exposed to architecture and the paintings from the old masters. They returned in 1886. During their travels, however, Parrish studied at the Paris school of a Dr. Kornemann.

He attended the Haverford School and later studied architecture at Haverford College for two years beginning in 1888. From 1892 to 1895, he studied at the Pennsylvania Academy of the Fine Arts to further his education in art. He studied under artists Robert Vonnoh and Thomas Pollock Anshutz. After graduating from the program, Parrish went to Annisquam, Massachusetts where he and his father shared a painting studio. A year later, he attended the Drexel Institute of Art, Science & Industry with his father's encouragement.

Parrish entered into an artistic career that lasted for more than half a century, and which helped shape the Golden Age of illustration and American visual arts. During his career, he produced almost 900 pieces of art including calendars, greeting cards, and magazine covers. Parrish's early works were mostly in black and white.

In 1885, his work was on the Easter edition of Harper’s Bazaar. He also did work for other magazines like Scribner's Magazine. He also illustrated a children's book in 1897, Mother Goose in Prose written by L. Frank Baum. By 1900, Parrish was already a member of the Society of American Artists. In 1903, he traveled to Europe again to visit Italy.

Parrish took many commissions for commercial art until the 1920s. Parrish's commercial art included many prestigious projects, among which were Eugene Field's Poems of Childhood in 1904, and such traditional works as Arabian Nights in 1909. Books illustrated by Parrish are featured in A Wonder Book and Tanglewood Tales in 1910, The Golden Treasury of Songs and Lyrics in 1911, and The Knave of Hearts in 1925.

Parrish worked with popular magazines throughout the 1910s and 1920s, including Hearst's and Life. He also created advertising for companies like Wanamaker's, Edison-Mazda Lamps, Colgate and Oneida Cutlery. Parrish worked with Collier's from 1904 to 1913. He received a contract to deal with them exclusively for six years. He also painted advertisements for D.M. Ferry Seed Company in 1916 and 1923, which helped him gain recognition in the eye of the public. His most well-known art work is Daybreak which was produced in 1923. It features female figures in a landscape scene. The painting also has undertones of Parrish blue. In the 1920s, however, Parrish turned away from illustration and concentrated on painting.