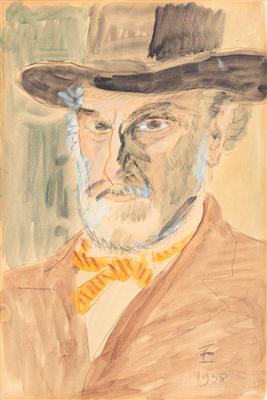 Pallady was born in Iaşi, but at a young age, his family sent him to Dresden, where he studied engineering at the Dresden University of Technology between 1887 and 1889. At the same time, he studied art with Erwin Oehme, who, recognising his artistic intuition, suggested that he go to Paris. In Paris, Pallady worked in the studio of Aman Jean and enrolled in the Academy of Fine Arts (Académie des Beaux-Arts). In 1892, he worked in the studio of Gustave Moreau, where he had as colleagues Henri Matisse, Georges Rouault, and Albert Marquet.

In 1904, Pallady returned to Romania, where he held an exhibition at the Romanian Athenaeum. However, he maintained close connections with Paris, where he continued to hold many personal exhibitions, up until World War II. Pallady never lost the contact with Romania and had friends from the community of Romanian artists and intellectuals living in Paris, including Benjamin Fondane, George Enescu, Constantin Brâncuși, Camil Ressu, Nicolae Dărăscu, Panait Istrati, Traian Vuia, Eugène Ionesco, Emil Cioran and Paul Celan. Theodor Pallady bought Brâncuși sculpture The first Kiss, this work is a little kiss (7.8" × 1.18" × 1.57") pink marble, and the first work of modern art. This sculpture is dated 1905 and was brought it with him to Romanian. He also exhibited at the Venice Biennale in 1924, 1940 and 1942.

He died in Bucharest, and is buried in Bellu cemetery.