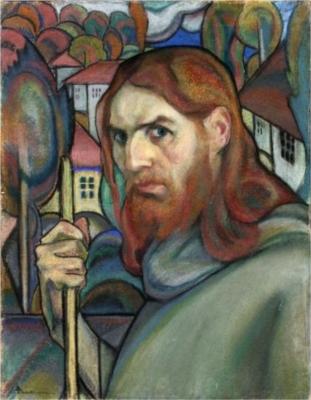 Ion Theodorescu-Sion (Romanian pronunciation: [iˈon te.odoˈresku siˈon]; also known as Ioan Theodorescu-Sion or Teodorescu-Sion; January 2, 1882 – March 31, 1939) was a Romanian painter and draftsman, known for his contributions to modern art and especially for his traditionalist, primitivist, handicraft-inspired and Christian painting. Trained in academic art, initially an Impressionist, he dabbled in various modern styles in the years before World War I. Theodorescu-Sion's palette was interchangeably post-Impressionist, Divisionist, Realist, Symbolist, Synthetist, Fauve or Cubist, but his creation had one major ideological focus: depicting peasant life in its natural setting. In time, Sion contributed to the generational goal of creating a specifically Romanian modern art, located at the intersection of folk tradition, primitivist tendencies borrowed from the West, and 20th-century agrarian politics.

Initially scandalized by Theodorescu-Sion's experiments, public opinion accepted his tamer style of the mid to late 1910s. Sion was commissioned as a war artist, after which his standing increased. His paintings alternated the monumental depictions of harsh rural environments, and their inhabitants, with luminous Balcic seascapes and nostalgic records of suburban life. Their search for visual concreteness was a standard for the anti-Impressionist emancipation of the Romanian artistic scene in the interwar period.

By the mid-1920s, Sion's style became a visual component of the neo-traditionalist, "Romanianist" and neo-Byzantine current formed around Gândirea literary magazine. In the years before his death, the emergent avant-garde was voicing criticism of his new stylistic and ideological choices. Sion's oscillation between modernity and parochialism, his flirtation with authoritarian politics, and the eventual decline of his work endure as topics of controversy.

The son of a Romanian Railways brakeman and the peasant-woman Ioana Ursu, Theodorescu-Sion was born in Ianca, Brăila County, and baptized into the Romanian Orthodox Church. On both sides, his family had origins in Transylvania's Apuseni Mountains and the Breadfield, regions at the time still part of Austria-Hungary; by popular account, some were Moți, that is to say ethnic Romanian herders with a distinctly rustic lifestyle. Ion spent his early childhood on the Bărăgan Plain, but grew up into a passionate hiker of the Carpathian Mountains.

In 1894, having attended primary and secondary school in the Danube port of Brăila, the boy left for Bucharest to study at the National School of Fine Arts, and graduated in 1897. From 1904 to 1907, with a Ministry of War scholarship to his name, he traveled to France. Sion consequently enlisted at the École nationale supérieure des Beaux-Arts, studying under academic masters Jean-Paul Laurens and Luc-Olivier Merson. He was a rebellious student, shaped by socialist ideas, and squandered his scholarship money.

Sion was rendered enthusiastic by news of the Revolution in Russia, and was thrown out by his conservative patrons. He burned all his belongings except a copy of Les Fleurs du mal, and traveled to French Algeria, where he probably intended to apply for the Foreign Legion. He later returned to Romania, but frequently traveled out of Romania on study trips. These took him to the Low Countries, England and Italy. He was a staff cartoonist (caricaturist) for various Romanian satirical papers, including Zavera ("The Trouble"), Nea Ghiță ("Uncle Ghiță") and George Ranetti's Furnica.