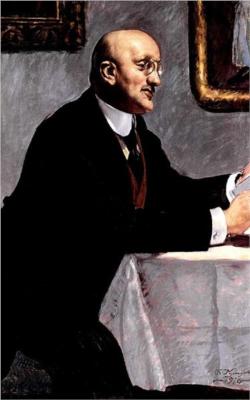 Igor Emmanuilovich Grabar (Russian: Игорь Эммануилович Грабарь, 25 March 1871 in Budapest – 16 May 1960 in Moscow) was a Russian post-impressionist painter, publisher, restorer and historian of art. Grabar, descendant of a wealthy Rusyn family, was trained as a painter by Ilya Repin in Saint Petersburg and by Anton Ažbe in Munich. He reached his peak in painting in 1903–1907 and was notable for a peculiar divisionist painting technique bordering on pointillism and his rendition of snow.

By the end of 1890s Grabar had established himself as an art critic. In 1902 he joined Mir Iskusstva, although his relations with its leaders Sergei Diaghilev and Mstislav Dobuzhinsky were far from friendly. In 1910–1915 Grabar edited and published his opus magnum, the History of Russian Art. The History employed the finest artists and critics of the period; Grabar personally wrote the issues on architecture that set an unsurpassed standard of understanding and presenting the subject. Concurrently he wrote and published a series of books on contemporary and historic Russian painters. In 1913 he was appointed executive director of the Tretyakov Gallery and launched an ambitious reform program that continued until 1926. Grabar diversified the Tretyakov collection into modern art and in 1917 published its first comprehensive catalogue. In 1921 Grabar became the first professor of Art restoration at the Moscow State University.

An experienced politician, Grabar stayed at the top of the Soviet art establishment until his death, excluding a brief voluntary retirement in 1933–1937. He managed art-restoration workshops (present-day Grabar Centre) during 1918–1930 and from 1944 to 1960. Grabar took active part in redistribution of former church art nationalized by the Bolsheviks and established new museums for the confiscated treasures. In 1943 he formulated the Soviet doctrine of compensating World War II losses with art looted in Germany. After the war, he personally advised Joseph Stalin on the preservation of architectural heritage.

Emmanuil Hrabar (1830–1910), father of Igor Grabar and his older brothers Bela and Vladimir (the future law scholar, 1865–1956), was an ethnic Rusyn lawyer and a politician of pro-Russian orientation. He was elected to the Hungarian Parliament in 1869, at the same time maintaining ties with slavophiles in Moscow and the Russian Embassy. Olga Hrabar (1843–1930), mother of Igor and Vladimir, was a daughter of Rusyn pro-Russian, anti-Catholic politician Adolph Dobryansky (1817–1901). According to Igor Grabar's memoirs, Dobryansky ran an underground network of obedient followers. Dobryansky and his group, unaware of the realities of living in the Russian Empire, leaned to its official doctrine of Orthodoxy, Autocracy, and Nationality; Dobryansky, a man of wealth and pedigree, even imitated the lifestyle of a Russian landlord in minute details; two of his sons joined Imperial Russian service. Dobryansky praised the suppression of the Hungarian Revolution of 1848 by Russian troops, dreaded by his own Rusyn peasants.

In the early 1870s the Hungarian government forced Emmanuil Hrabar to leave the country. Olga with children stayed under police surveillance at the Dobryansky manor in Čertižné (now in Slovakia). In 1880 the Hrabars temporarily reunited in Russia. Emmanuil passed qualification test to teach German and French and settled with Igor and Vladimir in Yegoryevsk. Olga returned to Hungary to continue pro-Russian propaganda; in 1882 she and her father were, at last, arrested for treason and brought to a trial that aroused public suspicion of a police provocation. She was acquitted for lack of evidence and emigrated to Russia for the rest of her life. In Russia the Hrabars lived under nom de guerre Hrabrov; Igor Grabar restored his real surname (transliterated from Russian with a G, unlike his brother Vladimir Hrabar) in the early 1890s.