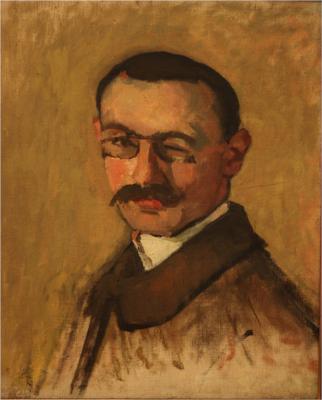 Albert Marquet (27 March 1875 – 14 June 1947) was a French painter, associated with the Fauvist movement. He initially became one of the Fauve painters and a lifelong friend of Henri Matisse. Marquet subsequently painted in a more naturalistic style, primarily landscapes, but also several portraits and, between 1910 and 1914, several female nude paintings.

Marquet was born in 1875 at Bordeaux. In 1890 he moved to Paris to attend the Ecole des Arts Decoratifs, where he met Henri Matisse. They were roommates for a time, and they influenced each other's work. Marquet began studies in 1892 at the École des Beaux-Arts under Gustave Moreau, a symbolist artist who was a follower of the Romantic tradition of Eugène Delacroix.

In these years, Marquet exhibited paintings at the Salon des Indépendants. Although he did not sell many paintings, the artistic community of Paris became aware of his work. His early compositions were characterised by a clear and painterly Fauvist approach, in which he had a fine control of the drawing and responded to light, not only by intensifying the strongest tones, but also by seeing the weaker ones in coloristic terms. Marquet and Matisse were already painting together in pure colors, as far back as 1898 in the Arcueil and at the Luxembourg Gardens, in what was later to be called the Fauve style. [Marquet refers to the Spring and Summer of 1898 - after the death of their common Paris' art-teacher Gustave Moreau; Marquet was then painting together with Henri Matisse ].

In 1905 he exhibited at the Salon d'Automne where his paintings were put together with those of Henri Matisse, Maurice de Vlaminck, André Derain, Othon Friesz, Georges Rouault, Raoul Dufy, Henri Manguin, Georges Braque, Louis Valtat, Georges Dufrénoy and Jean Puy. He became a lifelong friend of Matisse.

Dismayed by the intense coloration in these paintings, critics reacted by naming the artists the "Fauves", i.e. the wild beasts. Although Marquet painted with the fauves for years, he used less bright and violent colours than the others, and emphasized less intense tones made by mixing complementaries, thus always as colors and never as grays.

At the end of 1907 he stayed in Paris and dedicated himself, together with Matisse, to a series of city views. The fundamental difference between the two is that while Matisse used strong colours, Marquet favored grayed yellows, greyed violets or blues. Black was usually used as a violent contrast to light colors for such forms as bare tree trunks or calligraphically drawn people contrasted with very light, often yellow or orange streets and sidewalks. Another difference is that Marquet used an approximation of traditional perspective, although his colors and compositions constantly referred to the rectangle and cut its plane with their calligraphy.

From 1907 to his death, Marquet alternated between working in his studio in Paris and many parts of the European coast and in North Africa. He was most involved with Algeria and Algiers and with Tunisia. In his voyages he painted the sea and ships, but also the lights and animated life of the city, especially cities on the waterfront, like Algiers.