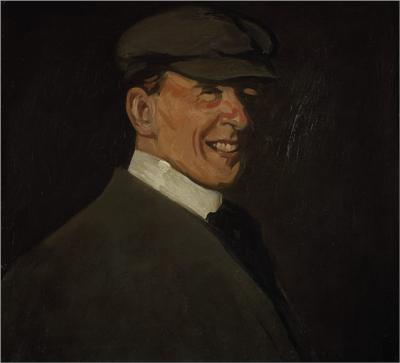 For the Chairman of Corrections Corporation of America, see John D. Ferguson.

John Duncan Fergusson (9 March 1874 – 30 January 1961) was a Scottish artist and sculptor, regarded as one of the major artists of the Scottish Colourists school of painting.

Fergusson was born in Leith, Edinburgh He was the first of 4 children. Although he briefly trained as a naval surgeon, Fergusson soon realised that his vocation was painting and he enrolled at the Trustees Academy, an Edinburgh-based art school. He rapidly became disenchanted with the rigid teaching style, however, and elected to teach himself to paint. To this end, he began to travel to Morocco, Spain and France, where he became acquainted with other artists of the day. Amongst them was Samuel Peploe, another of the group of artists who would later become identified as the Scottish Colourists.

In 1898, Fergusson took his first trip to Paris to study at the Louvre. He was highly influenced by the impressionist paintings at the Salle Caillebotte and these were an important influence on his developing style. Later he would also be influenced by Fauvism and the fauvist principles of using colour would become a strong feature of his art. Andre Dunoyer de Segonzac wrote in his foreword to Fergusson's memorial exhibition of 1961: "His art is a deep and pure expression of his immense love of life. Endowed with a rare plastic feeling, almost sculptural in its quality. He joined with it an exceptional sense of colour, outspoken, ringing colours, rich and splendid in their very substance."

Fergusson became part of the enormous growth in artistic talent that Paris was home to at the beginning of the twentieth century. There he mingled with artists like Matisse and Picasso in the café society for which the city was renowned. In addition, he and his friend Samuel Peploe regularly painted together at the a seaside resort of Paris Plage and other places along the coast between 1904-9. It was at this period too that he commenced his relationship with the American illustrator Anne Estelle Rice (1879–1959), whom he encouraged to take up painting. She had been sent to Paris to provide drawings for articles on theatre, ballet, opera and race meetings published in the North American magazine and was to figure in many of Fergusson's canvases.

By the outbreak of World War I, Fergusson was considered to be at the forefront of modern British painting. During the war years, however, he achieved little artistically and it was only towards the end of the war that he regained the momentum in his work.

In the 1920s Fergusson was settled in a studio in London. His first solo exhibition was in 1923 and he was also involved in several important group exhibitions. In 1928 he and his partner, the dancer Margaret Morris, moved to Paris, where they lived until the spectre of war once again loomed over Europe, prompting the couple to move to Glasgow in 1939 where they were to remain for the rest of their lives. A member of Glasgow Art Club, Fergusson exhibited a portrait in the club's exhibition, April 1939.