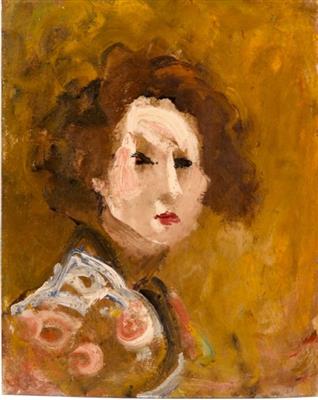 Émilie Charmy (pronounced "shar-mee") (April 2, 1878 – June 7, 1974) was an artist in France's early avant-garde. She worked closely with Fauve artists like Henri Matisse, and was active in exhibiting her artworks in Paris, particularly with Berthe Weill.


She had become an artist against the norms for French women in her day and became a well-regarded artist. She painted still lifes, landscapes, portraits, and figure paintings. Unusually for a woman at the time, she made a number of paintings of nude women in poses of sexual abandon. Charmy's initial works were Impressionist and Post-Impressionist paintings. As her career evolved she was influenced by Fauvism and the School of Paris movements. She was a recipient of the Chevalier of the Legion of Honor.


Émilie Espérance Barret was born on April 2, 1878, in Saint-Etienne, France.


She grew up in bourgeoisie family; her grandfather was Bishop of Toulouse and her father owned an iron foundry. She had two older brothers, one whom died of appendicitis. Orphaned when she was 15, she and her older brother Jean Barret then lived with relatives in Lyon. Émilie had a talent for both art and music as a child.


Émilie received a bourgeois educational training at a Catholic private school, and qualified to become a teacher, which if a woman were to have a career was limited to education.


When living at Lyon, she refused teaching jobs in the late 1890s and went to study and work in the studio of Jacques Martin. This was a critical moment in the further development of her career. Martin was involved with a number of other Lyon artists who became influential in Émilie's artistic development, including Louis Carrand and François Vernay who had a local reputation for a unique approach to flower painting.


During this time she assumed the name Émilie Charmy as her pseudonym.


When women were shunned from the art world, and most women regarded painting as a hobby, Charmy was consumed by her work and was entirely financially dependent on her art. For her, "painting was an obsession which dominated many other aspects of her life".
Charmy primarily painted women in domestic or bourgeois settings, as well as pictures of flowers and still-life. Her flower paintings and still-life paintings were very marketable because they were considered decorative, and were sought after by the middle class. In regards to Charmy's nude paintings, Gill Perry proposes that Charmy is intentionally trying to restrict the viewer from the intimate scenes that she depicts.


French novelist Roland Dorgelès described Charmy as "a great free painter; beyond influences and without method, she creates her own separate kingdom where the flights of her sensibility rule alone." There is a great sense of abstraction in her images, with varying opinions by art critics. Her bold use of color and her unapologetic brushstrokes have been deemed as "appropriating...a 'masculine' language of art production", according to her contemporaries. The most famous quote came from Roland Dorgelès:


It is Charmy's resistance to traditional gender roles that makes her unique for her time. For her career and depiction of nude women in a period in which that was unusual for women, she epitomized the New Woman of the 19th century and early 20th century.