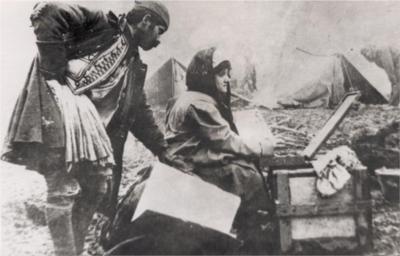 Thalia Flora-Karavia (Greek: Θάλεια Φλωρά-Καραβία, 1871–1960) was a Greek artist and member of the Munich School who was best known for her sketches of soldiers at war.

Flora traveled to various cities in Europe. In 1906 she staged a joint exhibition in Athens with Sophia Laskaridou. While visiting Egypt in 1907 she married the journalist Nicholas Karavia. She made Alexandria her home for the next thirty years. She founded and ran an art school there. During the Balkan Wars of 1912–13 she decided to follow the Greek troops as correspondent for the Alexandrian newspaper directed by her husband. Her drawings recorded the lives of the troops, refugees and casualties in an almost impressionist style. They were published in the 1936 book Impressions of the 1912–1913 war in Macedonia and Epirus. She also recorded the Asia Minor Campaign of 1921 and the Albanian Front during the Greco-Italian War of 1940–41.

In 1940 Flora-Karavia moved to Greece, where she lived for the remainder of her life. She died in Athens in 1960.

Thalia Flora-Karavia's work includes a wide range of themes including portraits, landscapes, still lifes, genre scenes and book illustrations. At first she followed the conservative rules of the Academy, but later adopted concepts from Impressionism and Plein air painting.

The War Museum of Athens has a large collection of watercolor drawings and pastels by Flora-Karavia from the Balkan Wars and the Greek war in Asia Minor in 1921. The sketches depict the campaigning at Emin Aga in February 1913, an improvised hospital at Philippiada, watering the horses, portable bread ovens, King Constantine I of Greece and his staff and so on.

About 70 of her war sketches were purchased from the artist in 1957 and donated to the Municipal Art Gallery of Ioannina.