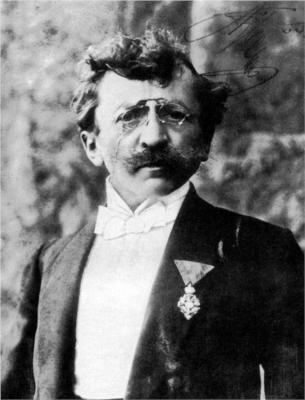 Anton Ažbe (30 May 1862 – 5 or 6 August 1905) was a Slovene realist painter and teacher of painting. Ažbe, crippled since birth and orphaned at the age of 8, learned painting as an apprentice to Janež Wolf and at the Academies in Vienna and Munich. At the age of 30 Ažbe founded his own school of painting in Munich that became a popular attraction for Eastern European students. Ažbe trained the "big four" Slovenian impressionists (Rihard Jakopič, Ivan Grohar, Matej Sternen, Matija Jama) and a whole generation of Russian painters (Ivan Bilibin, Mstislav Dobuzhinsky, Igor Grabar, Wassily Kandinsky, Dmitry Kardovsky and Kuzma Petrov-Vodkin, to name a few). Ažbe's training methods were adopted and reused by Russian artists both at home (Grabar, Kardovsky) and in emigration (Bilibin, Dobuzhinsky).

Ažbe's own undisputed artistic legacy is limited to twenty-six graphic works, including classroom studies, most of them at the National Gallery of Slovenia. His long-planned masterpieces never materialized and, according to Peter Selz, he "never came into his own as an artist". His enigmatic personality blended together alcoholism, chain smoking, bitter loneliness, minimalistic simple living in private, and eccentric behaviour in public. A public scarecrow and a bohemian socialite, Ažbe protected his personal secrets till the end, a mystery even to his students and fellow teachers. The public transformed the circumstances of his untimely death from cancer into an urban legend.

Twins Alois and Anton Ažbe were born in a peasant family in the Carniolan village of Dolenčice near Škofja Loka in the Austrian Empire (today, in Slovenia). Their father died of familial tuberculosis at the age of 40, when the boys were seven years old. Mother lapsed into a severe mental distress (there is unreliable evidence that she later committed suicide) and the boys were placed into foster care. By this time it was evident that while Alois developed normally, Anton suffered serious congenital health problems: he lagged in physical growth, his legs were weak and his spine deformed. His legal guardian reasoned that Anton was not fit for farm work; after completing an elementary school he sent Anton to "study commerce" in Klagenfurt.

After five years of living and working at a grocery store Ažbe ran away from Klagenfurt to Ljubljana. At some point in the late 1870s he met Janez Wolf, a Slovenian painter associated with the Nazarene movement who handled numerous church mural commissions. Little is known about Ažbe's experience with Wolf, apart from the facts that in 1880 Ažbe assisted Wolf with the frescoes of the Zagorje ob Savi church and, in 1882, with the facade of the Franciscan Church of the Annunciation in Ljubljana.

In the same year Wolf helped Ažbe with admission to the Academy of Fine Arts in Vienna, where Anton studied for two years. He was dissatisfied with outdated, uninspiring Viennese training and barely made passing grades. In 1884 he relocated to the Academy of Fine Arts in Munich, then a "liberal" and "modern" school as opposed to the conservative Viennese Academy. There he made a superb impression on his teachers Gabriel Hackl and Ludwig von Löfftz and earned a free scholarship. To make a living, Ažbe teamed up with Ferdo Vesel, selling classroom works and run-of-the-mill kitsch scenes to wholesale dealers. Half of Ažbe's surviving legacy dates back to the Munich Academy years; by the end of this period he was recognized as a professional portrait painter and was regularly exhibited in the Glaspalast.