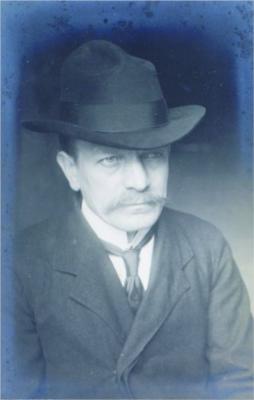 Sternen was born in Verd, now part of the Carniolan municipality of Vrhnika, then part of the Austro-Hungarian Empire. He attended the secondary school in Krško and attended technical school in Graz between 1888 and 1891. After finishing the school in Graz, he enrolled at the Academy of Fine Arts in Vienna. In 1897 he left Vienna for Munich, where he studied at Anton Ažbe's private art school. He lived and worked in the Bavarian capital until Ažbe's death in 1905.

Sternen became acquainted with Impressionism already in Graz. In Vienna, he saw the original paintings of several French impressionists. In Munich he studied with fellow countrymen Rihard Jakopič and Matija Jama, two other representatives of Slovene impressionism. Unlike them, Sternen preferred figurative art, and his work consists mostly of portraits and female nudes.

He became known chiefly as a restorer and conservator of old paintings, and dedicated the majority of his later life to restoration. He partly restored and partly repainted the ceiling in the Franciscan church in Ljubljana, originally decorated by Matevž Langus in the mid 19th century, but badly damaged in the 1895 Ljubljana earthquake.

During World War II, Sternen sympathized with the pro-Nazi collaborationist policy of general Leon Rupnik and even painted a portrait of him. He nevertheless suffered no persecution after the end of the war. He died in Ljubljana on 28 June 1949 and was buried in the Žale cemetery.