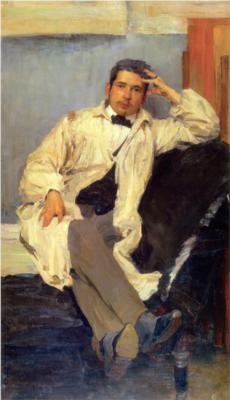 Konstantin Andreyevich Somov (Russian: Константин Андреевич Сомов, November 30, 1869 – May 6, 1939) was a Russian artist associated with the Mir iskusstva. Born into a family of a major art historian and Hermitage Museum curator Andrey Ivanovich Somov, he became interested in 18th-century art and music at an early age.

Somov studied at the Imperial Academy of Arts under Ilya Repin from 1888 to 1897. While at the Academy, he befriended Alexandre Benois, who would introduce him to Sergei Diaghilev and Léon Bakst. When the three founded the World of Art, Somov liberally contributed to its periodicals. Somov was homosexual, like many of the World of Art members.

Inspired by Watteau and Fragonard, he preferred to work with watercolours and gouache. For three years he worked upon his masterpiece, Lady in Blue, painted in the manner of 18th-century portraitists.

During the 1910s, Somov executed a number of rococo harlequin scenes and illustrations to the poems by Alexander Blok. Many of his works were exhibited abroad, especially in Germany, where the first monograph on him was published in 1909.

Following the Russian Revolution, he emigrated to the United States, but found the country "absolutely alien to his art" and moved to Paris. He was buried at the Sainte-Geneviève-des-Bois Cemetery.