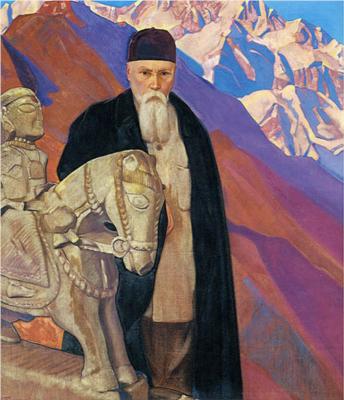 Nicholas Roerich (/ˈrɛrɪk/; October 9, 1874 – December 13, 1947) – known also as Nikolai Konstantinovich Rerikh (Russian: Никола́й Константи́нович Ре́рих) – was a Russian painter, writer, archaeologist, theosophist, perceived by some in Russia as an enlightener, philosopher, and public figure, who in his youth was influenced by a movement in Russian society around the spiritual. He was interested in hypnosis and other spiritual practices and his paintings are said to have hypnotic expression.

Born in Saint Petersburg, Russia, to a well-to-do notary public father of Baltic German ancestry and a Russian mother, he lived in various places around the world until his death in Naggar, Himachal Pradesh, India. Trained as an artist and a lawyer, his main interests were literature, philosophy, archaeology, and especially art. Roerich was a dedicated activist for the cause of preserving art and architecture during times of war. He earned several nominations for the Nobel Peace Prize long list. The so-called Roerich Pact was signed into law by the United States and most nations of the Pan-American Union in April 1935.

Raised in late-19th-century St. Petersburg, Roerich matriculated simultaneously at St. Petersburg University and the Imperial Academy of Arts during 1893. He received the title of "artist" in 1897 and a degree in law the next year. He found early employment with the Imperial Society for the Encouragement of the Arts, whose school he directed from 1906 to 1917. Despite early tensions with the group, he became a member of Sergei Diaghilev's "World of Art" society; he was president of the society from 1910 to 1916.

Artistically, he became known as his generation's most talented painter of Russia's ancient past, a topic that was compatible with his lifelong interest in archaeology. He also succeeded as a stage designer, achieving his greatest fame as one of the designers for Diaghilev's Ballets Russes. His best-known designs were for Borodin's Prince Igor (1909 and later productions), and costumes and set for The Rite of Spring (1913), composed by Igor Stravinsky.

Another of Roerich's passions was architecture. His acclaimed publication "Architectural Studies" (1904–1905) – the dozens of paintings he completed of fortresses, monasteries, churches, and other monuments during two long trips through Russia – inspired his decades-long career as an activist on behalf of artistic and architectural preservation. He also designed religious art for places of worship throughout Russia and Ukraine: most notably the Queen of Heaven fresco for the Church of the Holy Spirit which the patroness Maria Tenisheva built near her Talashkino estate; and the stained glass windows for the Datsan Gunzechoinei during 1913–1915.

During the first decade of the 1900s and in the early 1910s, Roerich, largely due to the influence of his wife Helena, developed an interest in eastern religions, as well as alternative (to Christianity) belief systems such as Theosophy. Both Roerichs became avid readers of the Vedantist essays of Ramakrishna and Vivekananda, the poetry of Rabindranath Tagore, and the Bhagavad Gita. The Roerichs' commitment to occult mysticism increased steadily. It was especially intense during World War I and the Russian revolutions of 1917, to which the couple, like many Russian intellectuals, accorded apocalyptic significance. The influence of Theosophy, Vedanta, Buddhism, and other mystical topics can be detected not only in many of his paintings, but in the many short stories and poems Roerich wrote before and after the 1917 revolutions, including the Flowers of Morya cycle, begun in 1907 and completed in 1921.