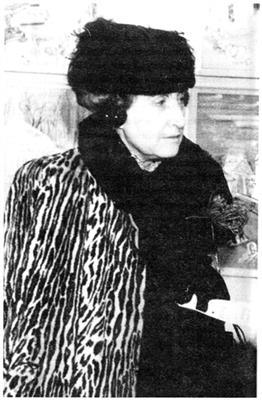 Marguerite Frieda Harris (née Bloxam, 1877, London, England — 11 May 1962, Srinagar, India) was an artist and, in later life, an associate of the occultist Aleister Crowley. She is best known for her design of Crowley's Thoth tarot deck.


Frieda Bloxam was a daughter of surgeon John Astley Bloxam, F.R.C.S. She married Percy Harris in April 1901. Percy Harris served as a Liberal Party MP 1916-18 and 1922–45, and was Chief Whip for his party. After her husband was created a baronet in 1932 she was entitled to style herself Lady Harris but preferred to use Lady Frieda Harris.


Aleister Crowley had asked playwright and author Clifford Bax to help him find an artist for a Tarot project. On 9 June 1937 Bax invited Frieda Harris after two artists did not show up for an appointment. She was then aged 60.


As well as reading books by Crowley, Harris' study of Rudolf Steiner's Anthroposophy was to be a critical aspect in the creation of the Thoth deck. Crowley's friend Greta Valentine, a London socialite, also knew Harris. Harris and Crowley did much of their work on the Thoth tarot deck at Valentine's house in Hyde Park Crescent, London.


In 1937 Harris began taking lessons in projective synthetic geometry, based upon the ideas of Goethe as reflected in the teachings of Steiner, from Olive Whicher and George Adams.


According to Crowley's unpublished Society of Hidden Masters, on 11 May 1938, Lady Harris became his "disciple" and also became a member of Ordo Templi Orientis, entering directly to the IV° (Fourth Degree) of that Order due to her previous initiation into Co-Masonry.

Crowley also began to teach her divination - she had a choice of discipline and opted for the I Ching:

The author William Holt in his autobiography describes how he accompanied Harris to Crowley's lodgings at 93 Jermyn Street, Piccadilly. While Harris drew some charcoal sketches, there was a discussion on The Book of Thoth that Crowley was writing.


By Crowley's own admission, the deck was originally intended to be traditional but Harris encouraged him to commit his occult, magical, spiritual and scientific views to the project.


Harris sent Crowley a regular stipend throughout the project. She also used her society contacts to find financial backers for the exhibition of the paintings, the catalogues, and for the publication of the Tarot deck. The pressure may have taken its toll on Harris and Crowley was sufficiently concerned to call in the lawyers to protect his 66% investment in the project. Crowley gives Harris praise in the introduction to the Book of Thoth:


Throughout the project she insisted on her own anonymity but she revelled in working for such a notorious man. The Book of Thoth was then published in a 200 copy limited edition, but neither Crowley or Harris lived to see the deck itself printed.


The surviving letters between Frieda Harris and Crowley show the level of their devotion to each other. On 29 May 1942 Crowley wrote to Pearson, the photoengraver of the Thoth deck: