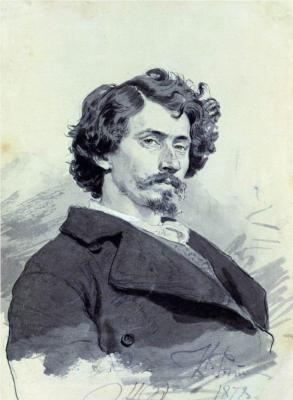 Ilya Repin was a talented Russian painter of the Peredvizhniki School, who was held up by the Soviet government as an artist to be imitated by the new school of Socialist Realists. At the age of 22, Repin began his art career at the Imperial Academy of Arts in St. Petersburg, the same time as the “Rebellion of the Fourteen,” when 14 young artists left the school after refusing to paint mythological paintings for their diplomas. These artists would later form the Society of the Peredvizhniki, which Repin joined in 1878. Repin and the free thinking “itinerants,” as they were also called, rebelled against the formal academy, insisting that art should reflect real life. As an art student, his travels took him to Italy, Paris and Impressionist Exhibitions, and although he was exposed to the vivid colors and quick brush strokes of the impressionist style, he remained true to his unique form of realism.

Many of the subjects Repin painted were common people, like himself, although he did on many occasions paint the Russian elite, intelligentsia, and Tsar Nicholas II. He also painted many of his contemporary compatriots, including novelist Leo Tolstoy, composer Modest Mussorgsky, scientist Dmitri Mendeleev, and Ukranian painter Taras Schevchenko. A common recurring theme in his paintings was the Russian Revolutionary Movement, and as a result his works are often classified as a “Russian national style.”

In his later life, he lived in a house in Kuokkala, Finland, called the Penates, which he designed and built himself. After the October Revolution of 1917, Finland declared Independence, and Repin was invited to return to the Soviet Union. He refused, saying that he was too old to make the journey, and remained in Finland until his death thirteen years later. In 1940, the Penates house was opened to the public as a museum.

Ilya Yefimovich Repin (Russian: Илья́ Ефи́мович Ре́пин, tr. Il'ya Yefimovich Repin; Finnish: Ilja Jefimovitš Repin; 5 August [O.S. 24 July] 1844 – 29 September 1930) was a Russian realist painter. He was the most renowned Russian artist of the 19th century, when his position in the world of art was comparable to that of Leo Tolstoy in literature. He played a major role in bringing Russian art into the mainstream of European culture. His major works include Barge Haulers on the Volga (1873), Religious Procession in Kursk Province (1883) and Reply of the Zaporozhian Cossacks (1880–91).

Repin was born in Chuguyev, in Kharkov Governorate, Russian Empire into a family of "military settlers". His father traded horses and his grandmother ran an inn. He entered military school to study surveying. Soon after the surveying course was cancelled, his father helped Repin to become an apprentice with Ivan Bunakov, a local icon painter, where he restored old icons and painted portraits of local notables through commissions. In 1863 he went to St. Petersburg Art Academy to study painting but had to enter Ivan Kramskoi preparatory school first. He met fellow artist Ivan Kramskoi and the critic Vladimir Stasov during the 1860s, and his wife, Vera Shevtsova in 1872 (they remained married for ten years). In 1874–1876 he showed at the Salon in Paris and at the exhibitions of the Itinerants' Society in Saint Petersburg. He was awarded the title of academician in 1876.

In 1880 Repin travelled to Zaporozhia in Russia to gather material for the 1891 Reply of the Zaporozhian Cossacks. His Religious Procession in Kursk Province was exhibited in 1883, and Ivan the Terrible and His Son Ivan in 1885. In 1892 he published the Letters on Art collection of essays. He taught at the Higher Art School attached to the Academy of Arts from 1894. In 1898 he purchased an estate, Penaty (the Penates), in Kuokkala, Finland (now Repino, Saint Petersburg).

In 1901 he was awarded the Legion of Honour. In 1911 he traveled with his common-law wife Natalia Nordman to the World Exhibition in Italy, where his painting 17 October 1905 and his portraits were displayed in their own separate room. In 1916 Repin worked on his book of reminiscences, Far and Near, with the assistance of Korney Chukovsky. He welcomed the Russian Revolution of 1917. Celebrations were held in 1924 in Kuokkala to mark Repin's 80th birthday, followed by an exhibition of his works in Moscow. In 1925 a jubilee exhibition of his works was held in the Russian Museum in Leningrad. Repin died in 1930 and was buried at the Penates.

Repin was born in the town of Chuguyev, in the Kharkov Governorate of the Russian Empire, in the heart of the historical region of the Sloboda Ukraine. His father Yefim Vasilyevich Repin was a private in the Uhlan Regiment of the Imperial Russian Army. As a boy Ilya was educated at the local school where his mother taught. From 1854 he attended a military Cantonist school. He did not have fond recollections of his childhood, mainly due to the military settlements his family lived in.