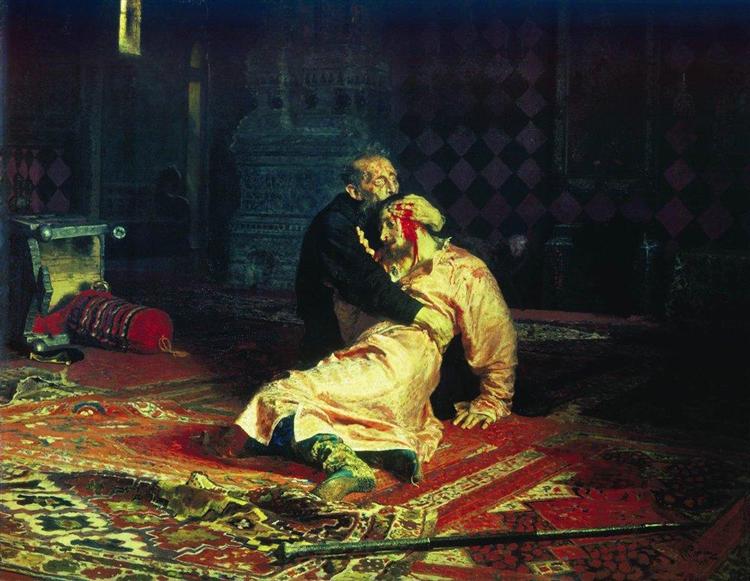 Although Repin strayed away from painting historical episodes, he completed Ivan the Terrible and His Son Ivan in the genre. This painting depicts the historical 16th century story of Ivan the Terrible mortally wounding his son in Ivan in a fit of rage. By far the most psychologically intense of Repin’s paintings, the Emperor’s face is fraught with terror, as his son lay quietly dying in his arms, blood dripping down the side of his face, a single tear on his cheek. Repin began thinking about painting this historical episode after the assassination of Alexander II. In an attempt to recall other bloody episodes of Russian history, he painted this piece as a as an expression of his rejection of violence and bloodshed.

Ivan the Terrible and His Son Ivan on 16 November 1581 is a painting by Russian realist artist Ilya Repin made between 1883 and 1885. The picture portrays a grief-stricken Ivan the Terrible cradling his mortally wounded son, the Tsarevich Ivan Ivanovich. The elder Ivan himself is believed to have dealt the fatal blow to his son.


The work is variously referred to as Ivan the Terrible and His Son Ivan, with or without the date, or Ivan the Terrible Killing His Son. Repin's painting has been called one of Russia's most famous paintings, and is also one of its most controversial. It has been vandalised twice, in 1913 and again in 2018.


The artist used Grigoriy Myasoyedov, his friend and fellow artist, as the model for Ivan the Terrible, with writer Vsevolod Garshin modelling for the Tsarevich. In 1885, upon completion of the oil on canvas work, Repin sold it to Pavel Tretyakov, for display in his gallery. It remains on display in the Tretyakov Gallery in Moscow.


In his memoirs, Repin said he was inspired to create the painting by the 1881 assassination of Tsar Alexander II, the music of Nikolai Rimsky-Korsakov, and the bullfighting he had witnessed in 1883.


The work is a large canvas, 199.5 by 254 centimetres (78.5 in × 100.0 in). The figures of Ivan and his son are depicted in a darkened room, with a blood red carpet. Ivan wears an austere black coat, contrasting with the more extravagant pink satin dressing gown and teal green boots worn by his son. The room is furnished with 17th century furniture and objects, which themselves reflect the violence that has been done: a chair is overturned; the rug is bunched up by the Tsarevich's feet.


Although one version of the title of the painting is Ivan the Terrible Killing His Son, the work does not depict Ivan the Terrible delivering a fatal blow, but rather the Tsar holding the Tsarevich in his arms, his face a mask of horror and despair, attempting to staunch the flow of blood from his son's temple. It probably dawns on the mentally unstable monarch that, by killing his son, he planted the seed for the Time of Troubles and the demise of his dynasty (as his only remaining heir is a dim-witted younger son who would be easily manipulated by powerful boyars).


Differences between Repin's sketches and his final work indicate a distancing of the Tsar from the attack on the Tsarevich: in early versions, Ivan the Terrible is holding the sceptre used to deliver the blow, but the instrument is left out of the completed work. The work is disturbing in the power of the emotions shown and in its "gory representation of violence". Repin later said of the time when he painted it, that "A trail of blood ran through that year... Terrible scenes were in everybody's mind."


The composition reflects two paintings by Rembrandt which Repin had studied and admired at the Hermitage, The Return of the Prodigal Son and David and Jonathan.