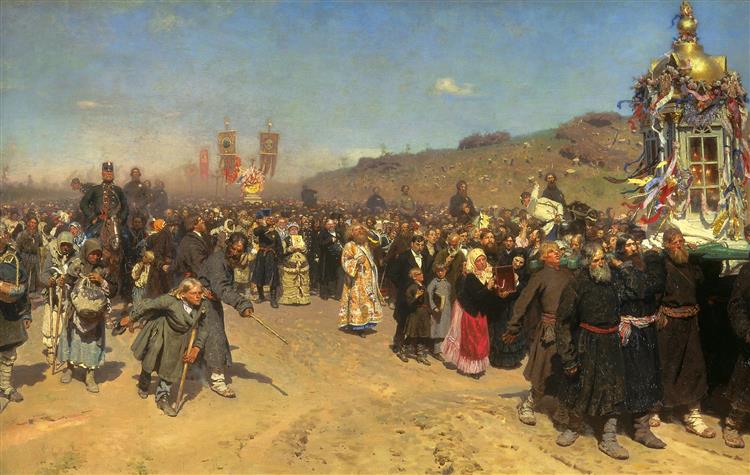 When it was first exhibited, Religious Procession in Kursk Province, which showed a seething mass of people following an Icon of Our Lady of Kursk, being held by what appears to be a drunk man. This is an example of Repin’s social commentary. He wrote that the world he perceived around him disrupted him gave him no peace, and thus he had to capture that world on the canvas. The world that he captured on this canvas displayed his perception of the abuses of the church and the state. A leading art collector, Pavel Tretyakov, bought the painting for 10,000 roubles, asking that Repin replace the young maids in the picture with a beautiful young girl, to which Repin refused. The painting is now held in Tretyakov Gallery in Moscow.

Religious Procession in Kursk Province (also known as Easter Procession in the District of Kursk or A Religious Procession in Kursk Gubernia') (Russian: Крестный ход в Курской губернии) is a large oil on canvas painting by the Russian realist painter and sculptor Ilya Repin (1844–1930). Completed between 1880 and 1883, the work shows a seething, huddled mass attending the annual religious procession (crucession) carrying the famous icon Our Lady of Kursk from its home at the Korennaya Monastery to the nearby city of Kursk in western Russia.

The procession is led through a dusty landscape by robed, Orthodox priests holding icons, festoons and banners over their heads. Behind them follow a crowd mostly of peasants, but ranging from beggars and cripples, police and military officers to figures from the provincial elite. Religious Procession led to controversy when first exhibited due to the icon being held by a man who appears to be drunk.

The work is a continuation of Repin's social commentary in his work, and highlights perceived abuses by both church and state. He wrote of the work, " am applying all of my insignificant forces to try to give true incarnation to my ideas; life around me disturbs me a great deal and gives me no peace – it begs to be captured on canvas..."

At the right, burly peasants carry a platform holding the icon inside an elaborate neo-classical case; only gleams of light reflecting off the gold riza icon-cover can be made out. Lines of peasants joining hands hold back the crowd, the foremost at the left trying to stop the crippled boy breaking through the cordon with his stick. Alongside ride peasant or priest stewards and officials and police in uniform, some of the latter beating back the crowd with their riding crops. Behind the icon follow priests and better-dressed people, carrying icons in front of their chest, and an "effete, dandified and bored priest" in vestments carefully straightens his hair. There is a comic effect with a stout middle-aged woman in a yellow dress and bonnet carrying an icon behind him, who looks very like a priest in his vestments. An empty icon-case, presumably that of the icon carried by the wealthy woman behind, is carried with as much reverence as the icon itself. The hillside at right appears to have been recently cleared of timber, with fresh tree stumps. Further back another platform, holding what appears to be a circular icon, is preceded by two large banners, and behind that a large processional cross can be made out through the cloud of dust.

The Procession is representative of Repin's style from the period, in that it first appears to be a scene from everyday life in Russia. In fact, it pointedly shows people from a range of social strata united and moving collectively towards their destination at Korennaya.

The painting was highly popular, but controversial. The journal publishing a favourable review by the leading critic Vladimir Stasov published an editorial in the next issue dissociating itself from his views, and a second review by the editor. Stasov had made much of the violence of the riders to the crowd. Apart from Leo Tolstoy, who praised the painting and regarded it as neutral in its depiction of the social system, all were agreed that it was hostile to the established social order. Another reviewer noted with disapproval the "undesirables who thronged around it at exhibition, noting a preponderance of liberated women with short haircuts, nihilistic young men, and a strong Jewish element; the chief characters of Imperial xenophobia".