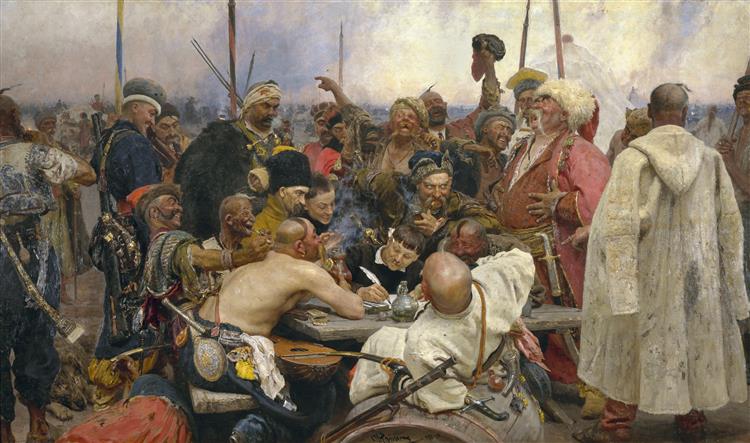 The Reply of the Zaporozhian Cossacks to Sultan Mehmed IV

Reply of the Zaporozhian Cossacks to Sultan Mehmed IV of the Ottoman Empire, also known as Cossacks of Saporog Are Drafting a Manifesto (Ukrainian: Запорожці пишуть листа турецькому султану), is a painting by Russian artist Ilya Repin. The 2.03 m (6 foot 7 inch) by 3.58 m (11 foot 9 inch) canvas was started in 1880 and finished in 1891. Repin recorded the years of work along the lower edge of the canvas. Alexander III bought the painting for 35,000 rubles, at the time the greatest sum ever paid for a Russian painting. Since then, the canvas has been exhibited in the State Russian Museum in Saint Petersburg.

Reply of the Zaporozhian Cossacks depicts a supposedly historical tableau, set in 1676, and based on the legend of Cossacks sending a reply to an ultimatum of the Sultan of the Ottoman Empire, Mehmed IV. The original reply, if it ever existed, has not survived; however, in the 1870s an amateur ethnographer from Yekaterinoslav (today Dnipro), Ya. Novitsky, found a copy made in the 18th century. He gave it to historian Dmytro Yavornytsky (1855-1940), who by chance read it to his guests, among whom was the painter Ilya Repin. Repin became curious about the story and in 1880 started the first of his studies.

According to the story, the Zaporozhian Cossacks (from 'beyond the rapids', Ukrainian: za porohamy), inhabiting the lands around the lower Dnieper River in Ukraine, had defeated Ottoman Empire forces in battle. However, Mehmed demanded that the Cossacks submit to Turkish rule. The Cossacks, led by Ivan Sirko, replied in an uncharacteristic manner: they wrote a letter, replete with insults and profanities. The painting exhibits the Cossacks' pleasure at striving to come up with ever more base vulgarities. During Repin's time, the Cossacks enjoyed great popular sympathy. Repin also admired them: "All that Gogol wrote about them is true! A holy people! No one in the world held so deeply freedom, equality, and fraternity."

The Cossacks' reply came as a stream of invective and vulgar rhymes, parodying the Sultan's titles:

While working on the original version, Repin in 1889 began work on a second version. This work he never finished. The second version of "The Cossacks" the artist tried to make more "historically authentic". In 1932 it was presented by the Tretyakov Gallery to the Kharkiv Historical Museum. In 1935, it was moved to the Kharkiv Art Museum, where it is now stored. This canvas is slightly inferior in size and quality to the original version, and is, as it were, the unofficial variant. Vladimir Gilyarovsky, a popular journalist of partial Cossack descent, was one of the models who posed for Repin.