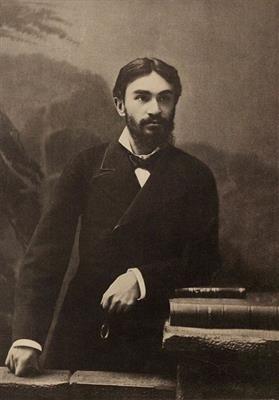 His father was an icon carver. From an early age he showed an interest in art; copying pictures from books. In 1858, the family moved to Kiev. Five years later, Ivan Soshenko, a teacher at the gymnasium, recommended that he pursue training in art. That same year, he began auditing classes at the Imperial Academy of Arts in Saint Petersburg.

Illness prevented him from completing his course of study and he settled in Voronezh, but continued to send works to the Academy. On this basis, he was certified as an art teacher and began his career in a local primary school in 1868. In 1879, the Academy named him an "Artist, 3rd Degree".

Over the years, he taught in several schools at different levels. From 1875 to 1901, he operated his own drawing school in Kiev which was supported by many well known artists; notably Ilya Repin, a friend from the Academy. Among those who attended the school were Mykola Pymonenko and Sergiy Kostenko. On his initiative, Kiev put on an annual art exhibition, beginning in 1877.

In the meantime, he produced numerous landscapes, many of which were purchased for the museum at the Academy. He also painted a few portraits and illustrated the first Ukrainian edition of Hans Christian Andersen's tales.

Teaching, however, was always his priority and his students were given individual attention. In addition, he made numerous trips to Vienna, Paris, Rome and other notable art centers to study the latest teaching methods and wrote articles for a variety of local and national periodicals.

After the school closed, he retired to the village of Bucha and began to write "Memoirs of an Old Master". Two parts were published, but the book was never finished, due to illness.