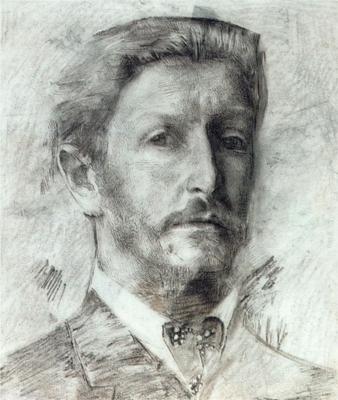 Mikhail Aleksandrovich Vrubel (Russian: Михаи́л Алекса́ндрович Вру́бель; March 17, 1856 – April 14, 1910, all n.s.) is usually regarded amongst the Russian painters of the Symbolist movement and of Art Nouveau. In reality, he deliberately stood aloof from contemporary art trends, so that the origin of his unusual manner should be sought in Late Byzantine and Early Renaissance painting.

Vrubel was born in Omsk, Russia to Anna Grigorievna (née Basargina) and Aleksandr Mikhailovich Vrubel. His paternal grandfather Mikhail Antonovich Vrubel was of Polish heritage (see Wróbel (surname)); he served in the Imperial Russian Army, then headed the Astrakhan Cossacks. Aleksandr Vrubel followed his father's steps and made a military career, taking part in the Caucasian and Crimean Wars before becoming a military lawyer. He married Anna Basargina, daughter of the acclaimed Russian cartographer, vice-admiral and war governor of the Astrakhan Governorate Grigory Gavrilovich Basargin who belonged to an old Russian noble family tree that traces its history back to the times of Ivan the Terrible, and his Danish wife Anna Karlovna von Krabbe.

Vrubel was one of the four children. His mother died when he was three years old. Though he graduated from the Faculty of Law at St Petersburg University in 1880, his father had recognized his talent for art and had made sure to provide, through numerous tutors, what proved to be a sporadic education in the subject. The next year he entered the Imperial Academy of Arts, where he studied by direction of Pavel Chistyakov. Even in his earliest works, he exhibited great talent for drawing and an idiosyncratic style. He would later develop a penchant for fragmentary composition and an "unfinished touch".

In 1884, he was summoned to replace the lost 12th-century murals and mosaics in the St. Cyril's Church of Kiev with new ones. In order to execute this commission, he went to Venice to study medieval Christian art. It was here that, in the words of an art historian, "his palette acquired new strong saturated tones resembling the iridescent play of precious stones". Most of his works painted in Venice have been lost, because the artist was more interested in creative process than in promoting his artwork.

In 1886, he returned to Kiev, where he submitted some designs to the newly built St Volodymir Cathedral. The jury, however, failed to appreciate the novelty of his works, and they were rejected. At that period, he executed some illustrations for Hamlet and Anna Karenina, which had little in common with his later Demon and Prophet themes.

In 1905 he created the mosaics of the hotel "Metropol" in Moscow, of which the centre piece of the facade overlooking Teatralnaya square is occupied by the mosaic panel Princess of Dream.

While in Kiev, Vrubel started painting sketches and watercolours illustrating the demon, from a long Romantic poem by Mikhail Lermontov. The poem described the carnal passion of "an eternal nihilistic spirit" for a Georgian girl Tamara. At that period Vrubel developed a keen interest in Oriental arts, and particularly Persian carpets, and even attempted to imitate their texture in his paintings.