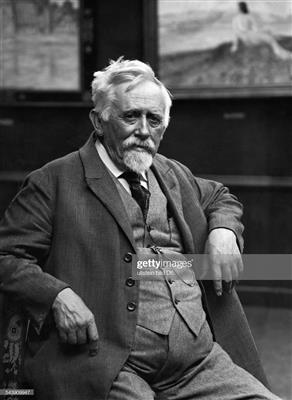 
Hermann Hendrich was born in the vicinity of the storied Kyffhäuser, his parents were Auguste Friederike Hendrich née Ziegler and the baker August Hendrich. From 1870 to 1872 he served his apprenticeship as lithographer; one year shorter than the regular duration due to his evident talent. He then started a job in a Hanoverian lamp factory where he had to draw a catalogue. At that time, he first attended a Wagnerian opera, Tannhäuser, and the wish emerged to be able to draw such musical impressions.


In 1875, Hendrich attended a job at a Berlin art institution where he had to lithograph oil paintings. in 1876, he visited Norway for further art studies. The jury of the "Grosse Berliner Kunstausstellung" (great Berlin art exhibition) disapproved however the exhibition of his paintings. Hendrich then started a job as painter in Amsterdam. In 1882, he married Clara (Kläre) Becker which he met there. On their honeymoon trip they visited Hendrich's brother in Auburn, New York. Here, he exhibited for the first time his paintings. After some initial sales, the remaining entire amount of pictures was bought by a single art dealer. Using the earned money Hendrich then made a study trip through the USA.


To further deepen his education, in 1885 he went back to Germany. He started lessons by Professor Wenglein in Munich, but then moved to Berlin, and made a study trip to Norway. In 1886, Hendrich entered a studio of the Berlin Academy of Art and received a stipend from the Prussion Ministry of Education and Arts. His paintings were firstly exhibited in Germany.


The Kaiser 1889 bought a picture from Hendrich, a highlight for his recognition.


In 1901, the "Walpurgishalle" in Thale, a building in a pseudo old-Germanic style was inaugurated. Hendrich did the paintings in the interior and created sketches that were used by Bernhard Sehring to create the architecture. Hendrich considered this as climax of his work.


Hendrich was a co-founder of the Werdandibund in 1905, a society against the modern developments of art, considered as decadent.


In 1910 the title professor was awarded to Hendrich.


The "Nibelungenhalle" at the Drachenfels was opened in 1913 on the occasion of Richard Wagner's centenary. It contains twelve paintings by Hendrich with scenes from Der Ring des Nibelungen.


In 1921, he published illustrations for an edition of Das Märchen (also known as The Green Snake and the Beautiful Lily), a 1795 story written by Johann Wolfgang von Goethe.


In 1926, the "Halle Deutscher Sagenring" in Burg an der Wupper (today part of Solingen) with Hendrich's paintings from the Percival saga was opened.


Hendrich died 1931 in Schreiberhau in an accident.