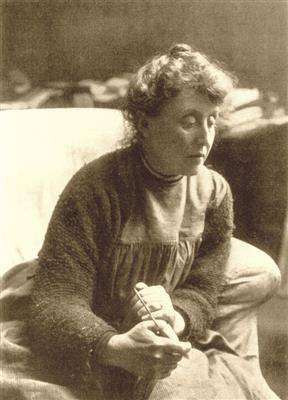 Evelyn De Morgan, (30 August 1855 – 2 May 1919) was an English painter whose works were influenced by the style of the Pre-Raphaelite movement. She was a follower of Pre-Raphaelist Edward Burne-Jones. Her paintings exhibit spirituality; use of mythological, biblical, and literary themes; light and darkness as metaphors; life and death; and allegories of war.


She was born Mary Evelyn Pickering at 6 Grosvenor Street, to upper middle class parents Percival Pickering QC, the Recorder of Pontefract, and Anna Maria Wilhelmina Spencer Stanhope, the sister of the artist John Roddam Spencer Stanhope and a descendant of Coke of Norfolk who was an Earl of Leicester.


Evelyn was educated at home and started drawing lessons when she was 15. On the morning of her seventeenth birthday, Evelyn recorded in her diary, "Art is eternal, but life is short…" "I will make up for it now, I have not a moment to lose." She went on to persuade her parents to let her go to art school. At first they discouraged it, but in 1873 she was enrolled at the Slade School of Art. She was granted a scholarship at Slade which entitled her to three years of financial assistance. However, since the scholarship required that she draw nudes using charcoal and she did not care for this technique, she eventually declined it.


She was also a pupil of her uncle John Roddam Spencer Stanhope, who was a great influence on her works. Beginning in 1875, Evelyn often visited him in Florence where he lived. This also enabled her to study the great artists of the Renaissance; she was particularly fond of the works of Botticelli. This influenced her to move away from the classical subjects favored by the Slade school and to make her own style. She first exhibited in 1877 at the Grosvenor Gallery in London and continued to show her paintings thereafter.


In August 1883, Evelyn met the ceramicist William De Morgan, and on 5 March 1887, they married. They spent their lives together in London. De Morgan, a pacifist, expressed her horror at the First World War and South African War in over fifteen war paintings including The Red Cross and S.O.S.


Relative to artistic pursuits, money was unimportant to the De Morgans; any profits from sales of Evelyn's paintings went toward financing William's pottery business and she actively contributed ideas to his ceramics designs.


Two years after his death in 1917, she died on 2 May 1919 in London and was buried in Brookwood Cemetery, near Woking, Surrey.


In August 1875 De Morgan sold her first work Tobias and the Angel. Her first exhibited painting, St Catherine of Alexandria was shown at the Dudley Gallery in 1876.

In 1877, De Morgan exhibited two works at Dudley Gallery (for sale) and was invited to exhibit at the first Grosvenor Gallery exhibition.

In October 1991, sixteen canvases were destroyed in a fire at Bourlet's warehouse.