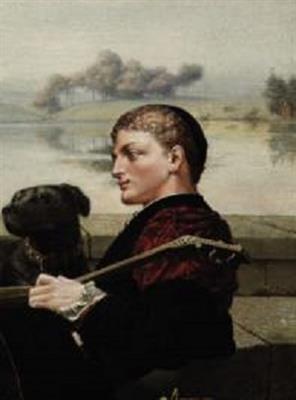 Robert Bateman (1842–1922) was an English painter, architect and horticultural designer.

He was the third son of James Bateman FRS (1811–1897), the accomplished horticulturist and landowner, who built Biddulph Grange and its gardens, in Staffordshire.

The Pool of Bethesda is at the Yale Centre of British Art. The Dead Knight is in a private collection, but there is a fine large colour reproduction in the book The Last Romantics (1989). The Lily or the Rose he presented to his old school, Brighton College, where it hung for many years on the main building staircase until destroyed c.1960 after Brighton Royal Pavilion Museum and Art Gallery refused to accept it as a gift.

As well as paintings, Bateman designed religious woodcuts, his work appearing in The Latin Year, The Church Service and A Century of Bibles.

Robert practised as an architect, most notably building Collyers, a house near Petersfield. He was also noted as a naturalist (corresponding with Charles Darwin), a botanical illustrator, sculptor, book illustrator, and an Italian scholar. He also left a horticultural legacy, in his planting of the gardens at Benthall Hall from 1890–1906 — much of his garden design there is still extant and is now maintained by the National Trust as part of Benthall Hall.

Robert married the daughter of the Dean of Lichfield in 1883, and became a wealthy owner of property and land. His fortune led him to become a noted philanthropist of the time. He and his wife Caroline lived near Much Wenlock, Shropshire, at the 16th-Century Benthall Hall; now a National Trust property.