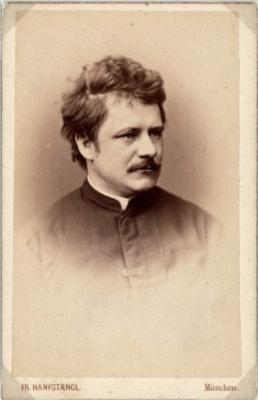 He was born Gabriel Cornelius Max, the son of the sculptor Josef Max and Anna Schumann. He studied between 1855 and 1858 at the Prague Academy of Arts with Eduard von Engerth. His studies included parapsychology (somnambulism, hypnotism, spiritism), Darwinism, Asiatic philosophy, the ideas of Schopenhauer, and various mystical traditions. The spiritual-mystical movement was emphasized by the writings of Carl du Prel, and the Munich painter Albert Keller was also an influence.

His first large canvas was painted in 1858 while he was a student at the Prague Academy. He continued his studies at the Viennese Academy of Art with Karl von Blaas, Karl Mayer (painter) (de), Christian Ruben and Carl Wurzinger (de). From 1863 to 1867 he studied at the Munich Academy with Karl Theodor von Piloty, and also Hans Makart and Franz Defregger. His first critical success was in 1867 with the painting "Martyr at the Cross": that painting transformed the "Unglücksmalerei" (dark palette) of Piloty into a religious-mystical symbolism using a psychological rendering of its subject.

He continued to use the dark palette of the Piloty school well into the 1870s, later moving toward a more muted palette, using fewer,clearer colors. From 1869, Gabriel von Max had his studio in Munich; in the summer, he was in the Ammerland at Starnberger Lake. From 1879-1883, Gabriel Max was a professor of Historical Painting at the Munich Academy; he also became a Fellow of The Theosophical Society. In 1900 he was ennobled and became a Ritter. He died in Munich in 1915.

His interest in anthropological studies also showed in his work. He owned a large scientific collection of prehistoric ethnological and anthropological finds: the collection and his correspondence now reside in the Reiss-Engelhorn-Museen in Mannheim. At his residence in Starnberger Lake, Gabriel Max surrounded himself with a family of monkeys, which he painted often, sometimes portraying them as human. Max, along with his colleagues, often used photographs to guide painting. The great number of monkey photographs in his archive testify to their use as direct translation into his paintings. In 1908, his painting "The Lion's Bride" became celebrated, and was depicted in motion pictures as an hommage in the Gloria Swanson film, Male and Female, (1919), directed by Cecil B. de Mille.

Gabriel von Max was a significant artist to emerge from the Piloty School, because he abandoned the themes of the Grunderzeitliche (genre and history), in order to develop an allegorical-mystical pictorial language, which became typical of Secessionist Art. Characteristic of the ethereal style of Gabriel Max is "The Last Token" (in the Metropolitan Museum), and "Light" (in the Odessa Museum of Western and Eastern Art, Ukraine).

The largest collection of the work of Gabriel von Max in the United States is held by the Jack Daulton Collection in Los Altos Hills, California.