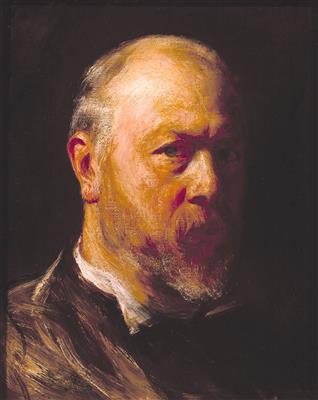 As an enthusiastic amateur musician, he helped the career of the young composer Hamish MacCunn by organizing concerts for him in his own studio. MacCunn, who would marry his daughter Alison in 1888, also served as a model for many of his paintings and sketches in various distinctive occasions.

John Pettie was born in Edinburgh, the son of Alexander and Alison Pettie. In 1852 the family moved to East Linton, Haddingtonshire. Initially, his father objected to Pettie taking up art as a career, but this was overcome following a portrait by the lad of the village carrier and his donkey.

When he was sixteen he entered the Trustees Academy in Edinburgh, working under Robert Scott Lauder with William Quiller Orchardson, J. MacWhirter, William McTaggart, Peter Graham (1836–1921), Tom Graham (1840–1906) and George Paul Chalmers. His first exhibits at the Royal Scottish Academy were A Scene from the Fortunes of Nigel, one of the many subjects for which he sought inspiration in the novels of Sir Walter Scott, and two portraits in 1858, followed in 1859 by The Prison. To the Royal Academy in 1860 he sent The Armourers; and the success of this work and What d'ye Lack, Madam? in the following year encouraged him to settle in London (1862), where he joined Orchardson.

In 1866 he was elected an Associate of the Royal Academy, and in 1874 received full academical honours in succession to Sir Edwin Landseer. His diploma picture was Jacobites, 1745. Pettie was a hard and rapid worker, and, in his best days, a colourist of a high order and a brilliant executant. In his early days he produced a certain amount of book illustration. His connection with Good Words began in 1861, and was continued until 1864. He painted a portrait of the painter James Campbell Noble RSA and this is exhibited in the Scottish National Portrait Gallery in Edinburgh. In 1894 a selection of his work was included in the Winter Exhibition of the Royal Academy. His self-portrait is in the Tate Gallery.

The National Portrait Gallery has four of his works in its collection.