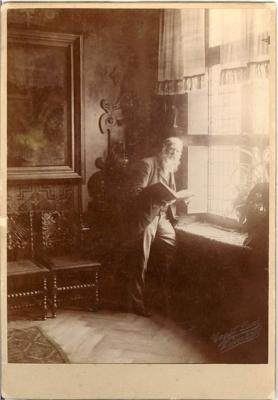 Franz Karl Eduard von Gebhardt (13 June 1838 – 3 February 1925) was a Baltic German historical painter. He was born in Järva-Jaani, Estonia, the son of a Protestant clergyman, and studied first at the Academy of St. Petersburg (1855–58). In 1860 he became the pupil of Wilhelm Sohn at Düsseldorf, where he permanently settled, and became professor at the academy in 1873. One of his students was the German-Brazilian painter Wilhelm Techmeier.

There is a religious tone defining many of his most highly regarded paintings. Their chief characteristic is their deep and powerful yet varied expression of religious feeling. The more important among the many biblical scenes he painted are:

Of episodes from the Reformation one is "The Reformer at Work" (1877, Leipzig Museum). In the former Cistercian monastery at Lokkum may be seen six mural paintings: "Scenes from the Life of Christ". Mural paintings of similar subjects may be found at the Friedenskirche, Düsseldorf.

Gebhardt also painted many excellent portraits, and was awarded gold medals at Berlin, Dresden, Munich, Vienna, and Paris; and was elected a member of the academies of Antwerp, Berlin, Brussels, Munich, and Vienna. He died in 1925.

He took prototypes of local peasants which he draw down while visiting Estonia. He was a tutor to famous Estonian painters like Ants Laikmaa, Kristjan and Paul Raud.