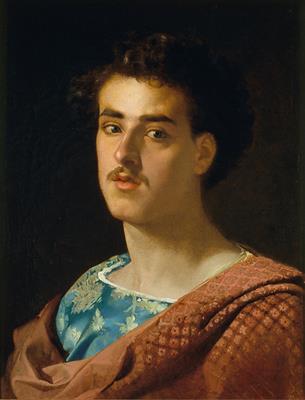 Marià Josep Maria Bernat Fortuny i Marsal (Catalan pronunciation: [məɾiˈa ʒuˈzɛb məˈɾi.ə βəɾˈnat fuɾˈtuɲ i məɾˈsal]; Spanish: Mariano José María Bernardo Fortuny y Marsal; June 11, 1838 – November 21, 1874), known more simply as Marià Fortuny or Mariano Fortuny, was the leading Spanish painter of his day, with an international reputation. His brief career encompassed works on a variety of subjects common in the art of the period, including the Romantic fascination with Orientalist themes, historicist genre painting, military painting of Spanish colonial expansion, as well as a prescient loosening of brush-stroke and color.


He was born in Reus, a city near Tarragona, in Catalonia, Spain. His father died when he was an infant, and his mother by the time he was 12. Thus, Marià was raised by his grandfather, a cabinet-maker who taught him to make wax figurines. At the age of 9, at a public competition in his town, a local painter, teacher and patron, Domènec Soberano, encouraged further study. At the age of 14 he moved to Barcelona with his grandfather. The sculptor Domènec Talarn secured him a pension allowing him to attend the Escola Provincial de Belles Arts (the Escola de la Llotja). There he studied for four years under Claudi Lorenzale and Pau Milà i Fontanals [es], and in March 1857 he gained a scholarship that entitled him to two years of studies in Rome starting in 1858. There he studied drawing and grand manner styles, together with Josep Armet i Portanell and Ricardo de Madrazo, at the Academia Gigi.


In 1859, he was called by the Government of the Province of Barcelona (Diputació de Barcelona) to depict the campaigns of the Spanish-Moroccan War. He went to Morocco from February to April of that year, making sketches of landscapes and battles, which he showed in Madrid and Barcelona when he returned. These would later serve him as preliminary sketches for his monumental piece, The Battle of Tetuan (La batalla de Tetuan, 1862–64, Museu Nacional d'Art de Catalunya).


In 1870, the artist and his family moved to Granada. Originally, this was to be a stage in an extended tourist trip that had taken the group to different localities in Andalusia. However, after arriving in Granada, Fortuny felt compelled to settle down there and work. They arrived in the Summer of 1870 and remained until the autumn of 1872 – a stay of some two and half years. According to several of his biographers, Fortuny established an atelier, known as Estudio de los Mártires, in Granada. The exact location of this studio has remained a mystery. However, recent scholarship has revealed that the location was a house known as Casa de Buena Vista, situated in the neighborhood of the Realejo, at the modern entrance of the Matamoros alley, between the current esplanade of the Alhambra Palace hotel and the Cross of the Martyrs.


Since the days of Velázquez, there had been a tradition in Spain (and throughout Europe) of memorializing battles and victories in paint. On the basis of his experiences, Fortuny was commissioned by the Council of the Province of Barcelona (Diputació de Barcelona) to paint a large canvas diorama of the capture of the camps of Muley-el-Abbas and Muley-el-Hamed by the Spanish army. He began his composition of The battle of Tetuan on a canvas 15 metres long; but, though he worked on it off and on during the next decade, it was never finished.