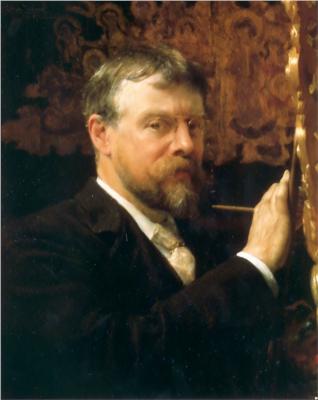 Lawrence Alma-Tadema is one of the most highly renowned romantic artists of late 19th century Britain. He was born in the Netherlands as Laurens Tadema, to the family of the town notary. Later, as he tried to make his niche in the art world, he changed the spelling of his first name to the more English “Lawrence,” and included his middle name “Alma” as part of his surname, so he would be listed among the “A’s” in exhibition catalogues.

As a child, it was decided that Alma-Tadema would pursue the career of a lawyer, but he suffered a mental and physical breakdown when he was fifteen years old. He was diagnosed as consumptive, given a short time to live, and thus free to pursue a life of leisure and pleasure. Once left to his own devices, he decided to study art, as his mother had paid for art lessons in his earlier childhood and it was one of his interests. He regained his health and studied at the Royal Academy of Antwerp in 1852, where he won several respected awards. His first major work was exhibited in 1858, and it won much critical praise, and creating a sensation in the art world. By 1862, he set own in his own studio to pursue his individual career in art.

In 1869, Alma-Tadema lost his wife of six years to smallpox. Disconsolate and depressed, he ceased painting and his health was failing. Under the advice of his physician, he traveled to England for a medical diagnosis, where he was invited to the house of a fellow painter, Ford Madox Brown. It was here that he laid eyes on Laura Theresa Epps, who was 17 at the time, and fell madly in love with her. Alma-Tadema took advantage of the outbreak of the Franco-Prussian war to relocate to England, where he wasted no time contacting Laura and contracting her in private art lessons. It was during one of these lessons that Alma-Tadema proposed, and they were married shortly thereafter. Alma-Tadema was 34 years old, and the bride 18.

Alma-Tadema spent the next part of his life traveling through Europe, and enjoying the continued success of his paintings. As a man, his bursts of bad temper were eased by his extroverted, warm personality and sense of mischief. A perfectionist and obsessive worker, he also innovated a new numbering technique, which made it difficult for forgers to pass off unoriginal works. In his later years, although his artistic output decreased somewhat, he enjoyed continued success, eventually becoming one of the wealthiest painters of the 19th century. He was knighted in England in 1899.

In 1912, Alma-Tadema traveled to Germany to undergo treatment for stomach ulcer, and died in Germany at the age of 76. After his death, his work was mostly ignored. Due to the drastic changes taking place in art, Alma-Tadema’s artistic genius would not come into the public eye again until the 1960s. His meticulous work had since been used as source material for dozens of Hollywood movies.

Sir Lawrence Alma-Tadema, OM, RA (/ˈælmə ˈtædɪmə/; born Lourens Alma Tadema Dutch pronunciation: [ˈlʌurəns ˈɑlmaː ˈtaːdəˌmaː]; 8 January 1836 – 25 June 1912) was a Dutch painter of special British denizenship. Born in Dronrijp, the Netherlands, and trained at the Royal Academy of Antwerp, Belgium, he settled in England in 1870 and spent the rest of his life there. A classical-subject painter, he became famous for his depictions of the luxury and decadence of the Roman Empire, with languorous figures set in fabulous marbled interiors or against a backdrop of dazzling blue Mediterranean Sea and sky. Though admired during his lifetime for his draftsmanship and depictions of Classical antiquity, his work fell into disrepute after his death, and only since the 1960s has it been re-evaluated for its importance within nineteenth-century British art.

Lourens Alma Tadema was born on 8 January 1836 in the village of Dronrijp in the province of Friesland in the north of the Netherlands. The surname Tadema is an old Frisian patronymic, meaning 'son of Tade', while the names Lourens and Alma came from his godfather. He was the sixth child of Pieter Jiltes Tadema (1797–1840), the village notary, and the third child of Hinke Dirks Brouwer (c. 1800–1863). His father had three sons from a previous marriage. His parents' first child died young, and the second was Atje (c. 1834–1876), Lourens' sister, for whom he had great affection.

The Tadema family moved in 1838 to the nearby city of Leeuwarden, where Pieter's position as a notary would be more lucrative. His father died when Lourens was four, leaving his mother with five children: Lourens, his sister, and three boys from his father's first marriage. His mother had artistic leanings, and decided that drawing lessons should be incorporated into the children's education. He received his first art training with a local drawing master hired to teach his older half-brothers.

It was intended that the boy would become a lawyer; but in 1851 at the age of fifteen he suffered a physical and mental breakdown. Diagnosed as consumptive and given only a short time to live, he was allowed to spend his remaining days at his leisure, drawing and painting. Left to his own devices he regained his health and decided to pursue a career as an artist.

In 1852 he entered the Royal Academy of Antwerp in Belgium where he studied early Dutch and Flemish art, under Gustaf Wappers. During Alma-Tadema's four years as a registered student at the Academy, he won several respectable awards.

Before leaving school, towards the end of 1855, he became assistant to the painter and professor Louis (Lodewijk) Jan de Taeye, whose courses in history and historical costume he had greatly enjoyed at the Academy. Although de Taeye was not an outstanding painter, Alma-Tadema respected him and became his studio assistant, working with him for three years. De Taeye introduced him to books that influenced his desire to portray Merovingian subjects early in his career. He was encouraged to depict historical accuracy in his paintings, a trait for which the artist became known.