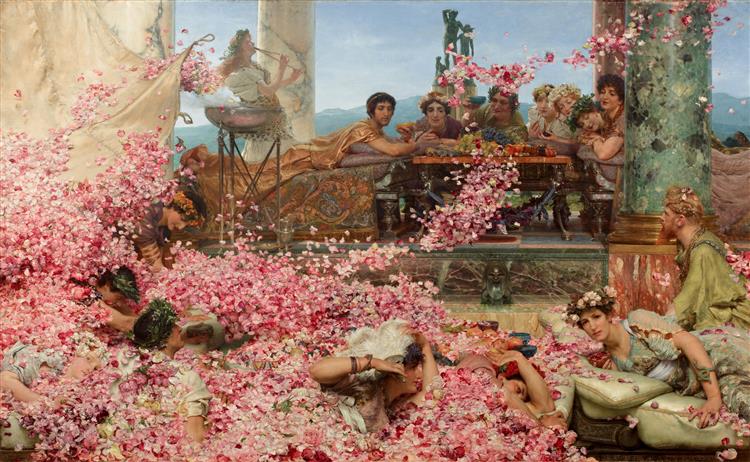 The Roses of Heliogabalus

The Roses of Heliogabalus is one of Alma-Tadema’s most famous paintings. It depicts the Roman Emperor Egabalus (Heliogabalus), a debauched psychotic. In this episode, he is attempting to smother his unsuspecting audience with rose petals, which have been let loose from false ceiling panels. Alma-Tadema, being a meticulous perfectionist, wanted each petal to be as perfectly realistic as possible, and had shipments of rose petals sent to him from the Riviera over the winter of 1887-1888, so he would have fresh examples. This was a common practice by Alma-Tadema, who often ordered flowers from all over Europe and sometimes Africa, as examples for his paintings, rushing to complete the work before the flowers died.

The Roses of Heliogabalus is an 1888 painting by the Anglo-Dutch artist Sir Lawrence Alma-Tadema depicting the young Roman emperor Elagabalus hosting a banquet.

The painting measures 132.7 × 214.4 centimetres (52.2 × 84.4 in). It shows a group of Roman diners at a banquet, being swamped by drifts of pink rose petals falling from a false ceiling above. The Roman emperor Elagabalus reclines on a platform behind them, wearing a golden robe and a tiara, watching the spectacle with other garlanded guests. A woman plays the double pipes beside a marble pillar in the background, wearing the leopard skin of a maenad, with a bronze statue of Dionysus, based on the Ludovisi Dionysus, in front of a view of distant hills.

The painting depicts a (probably invented) episode in the life of the Roman emperor Elagabalus, also known as Heliogabalus (204–222), taken from the Augustan History. Although the Latin refers to "violets and other flowers", Alma-Tadema depicts Elagabalus smothering his unsuspecting guests with rose petals released from a false ceiling. The original reference is this:

In his notes to the Augustan History, Thayer notes that "Nero did this also (Suetonius, Nero, xxxi), and a similar ceiling in the house of Trimalchio is described in Petronius, Sat., lx." (Satyricon).

The painting was commissioned by Sir John Aird, 1st Baronet for £4,000 in 1888. As roses were out of season in the United Kingdom of Great Britain and Ireland, Alma-Tadema is reputed to have had rose petals sent from the south of France each week during the four months in which it was painted.

Alma-Tadema's reputation declined markedly in the decades after his death. Following the death of the 2nd Baronet in 1934, the painting was sold by his son, the 3rd Baronet, in 1935 for 483 guineas. It failed to sell at Christie's in 1960, and was "bought in" by the auction house for 100 guineas. Next it was acquired by Allen Funt: he was the producer of Candid Camera, and a collector of Alma-Tadema's at a time when the artist remained very unfashionable. After Funt experienced financial troubles, he sold the painting along with the rest of his collection at Sotheby's in London in November 1973, achieving a price of £28,000. The painting was sold again by American collector Frederick Koch at Christie's in London in June 1993 for £1,500,000. It is currently owned by the Spanish-Mexican billionaire businessman and art collector Juan Antonio Pérez Simón.