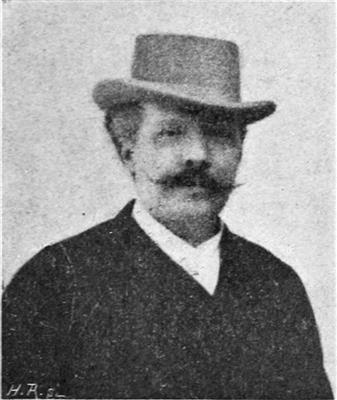 Édouard Riou (2 December 1833 – 27 January 1900) was a French painter and illustrator who illustrated six novels by Jules Verne, as well as several other well-known works.

Riou was born in 1833 in Saint-Servan, Ille-et-Vilaine, and studied under Charles-François Daubigny and Gustave Doré, graduating in 1859. Apart from engravings, his artistic specialties included landscape painting and commemorative art (including works for the opening of the Suez Canal and the marriage of a daughter of the Czar).

His collaboration with Jules Verne started in 1865 with the publication of Verne's novel Five Weeks in a Balloon, and continued for a run of six novels in all:

Regarding Riou's work for Twenty Thousand Leagues Under the Sea, Verne wrote in 1868: "I have received the drawings from Riou. I have several suggestions to make which I’ll mention to him by return mail. I think he needs to make the people much smaller and the rooms much larger. And he needs to add much more detail... By the way, it was an excellent idea to use Colonel Charras as the model for Captain Nemo. I should’ve thought of that."

The illustrator and Verne scholar Ron Miller has said: "I believe his work stylistically spans the transition between the illustrators of the early 19th century and those of the latter half—when the profession of professional illustrators became established. Some of the qualities that Riou carried over were the often cartoon-like depiction of characters and the use of numerous ‘spot’ illustrations.”

Edmondo Marcucci wrote: "Riou’s drawings are rich with light, and the traits of his characters have a vigorous expression. Riou succeeds in adapting himself artistically to the realistic reproduction of the many fantastic locales of the Vernian fictional geography: the mists and the glacial icepacks, the shadows inside the Earth’s crust, the deserted and expansive beaches, and the many bodies of water and their movement... Everything is both ordered and evocative in Riou’s work—his style might be called 'romantic realism.'"