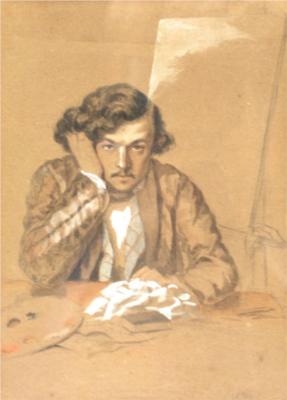 Theodor Aman was one of the most important Romanian painters of the XIXth century. His works blend Romanticism and Academicism, as well as bearing characteristics of early/Pre-Impressionism. He took drawing lessons with the painter Constantin Lecca, at Central School in Craiova, and in 1850 he leaves for Paris. Here, he studies painting at the Academy of Fine Arts, under the supervision of Michel Martin Drolling and François Edouard Picot. He returns to Romania in 1857, already established as a painter. His workshop becomes one of the most popular meeting places of high society, „the only artistic center of Bucharest's elite of that time“. His contribution to Romanian art transcends his work, by his important contribution to the establishment of the first Fine Arts School in Bucharest (1864), where he was both the first teacher and the director.

The thematics approached by Theodor Aman in his works - historical painting, gender and Oriental scenes, scenery, still nature - are distinctly represented in the exhibition, through works of important heritage value. The techniques employed by Theodor Aman range from easel painting, engraving and drawing. Moreover, his works range from large scale painting (particularly heroic representations of the past and historical portraits) and small scale works (contemporary or daily life projects).

His father was a cavalry commander from Craiova but he was born in Câmpulung, where his family had fled to escape the plague. After displaying an early affinity for art, he took his first lessons with Constantin Lecca and Carol Wallenstein de Vella (ro) at Carol I National College. In 1850, he went to Paris, where he studied briefly with Michel Martin Drolling then, after Drolling's death, with François-Édouard Picot. While there, he became part of the Romanian revolutionary circles. Three years later, he had his first exhibition at the Salon.

After that, he went to Istanbul in an effort to sell some paintings to the Sultan and visited Sevastopol during the Crimean War, creating history paintings with themes related to Romania's nationalist aspirations. In 1855, he presented one of his best-known works, depicting the Battle of Alma, at the Exposition Universelle.

When he returned home, he was knighted by Prince Barbu Dimitrie Știrbei and presented with a scholarship to continue his studies in Paris, where he came under the influence of the Barbizon school. After a brief stay in Rome, he returned to Bucharest.

In 1864, he and Gheorghe Tattarescu convinced Romania's ruler, Alexandru Ioan Cuza, to establish the "National School of Fine Arts" (now known as the Bucharest National University of Arts). Aman was appointed its first Director and held that position until his death. In 1908, his home/workshop became a museum.

In 2014, to celebrate the 150th anniversary of the school's founding, Poșta Română issued a commemorative stamp with Aman's likeness.