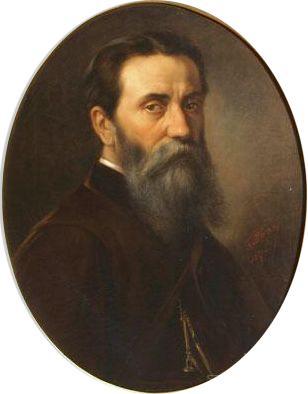 Tattarescu was born in Focşani in 1818. He started out as an apprentice to his uncle Nicolae Teodorescu, a church painter. He went on to study at the Painting School from Buzău, when Teodorescu moved there. The Orthodox Bishop of Buzău, Chesarie, helped him obtain a scholarship in Rome, where he was taught by professors from the Accademia di San Luca. While there, Tattarescu made copies of paintings by Raphael, Bartolomé Estéban Murillo, Salvatore Rosa, and Guido Reni.

Tattarescu was a participant in the 1848 Revolution in Wallachia. After the revolution, he painted portraits of Romanian revolutionaries in exile such as Gheorghe Magheru, Ştefan Golescu, and, in 1851, that of Nicolae Bălcescu (in three almost identical versions). Romantic nationalist ideals were the inspiration for his allegorical compositions with revolutionary (Romania's rebirth, 1849) and patriotic (The Principalities' Unification, 1857 and February 11 - The Modern Romania, 1866) themes.

In 1860, being commissioned to draw up a National Album of sights and historical monuments of the country, his talent of painting vaguely Romantic landscapes became highly valued. At the same time, showing his sympathy with various peasant uprisings, he painted The peasant at the Danube in 1875. He was also commissioned to decorate several churches in a neoclassical manner.

In 1864, together with painter Theodor Aman, Tattarescu founded the National School of Fine Arts in Bucharest; he was a professor there for a long time after, and served as the School's headmaster for two years (1891–1892).

In 1865, he wrote Useful Principles and Studies on Proportions of the Human Body and Drawing after the Most Famous Painters.

Tattarescu died in Bucharest. The house he bought in 1855 and lived in for almost 40 years is now home to the Gheorghe Tattarescu Memorial Museum. It was opened 1951, and hosts several of his original works of art.