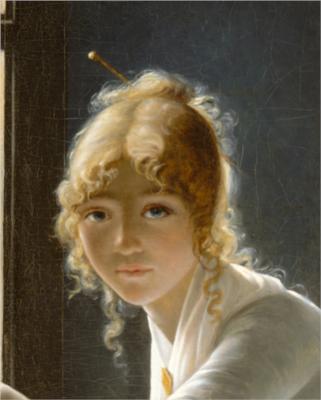 Marie-Denise Villers (née Lemoine; 1774 – 19 August 1821) was a French painter who specialized in portraits.

Marie-Denise Lemoine was born in Paris to Charles Lemoine and Marie-Anne Rouselle. Two of her three sisters, Marie-Victoire Lemoine (1754–1820) and Marie-Élisabeth Gabiou (1755–1812), as well as distant cousin Jeanne-Elisabeth Chaudet (1767–1832), were all trained as portraitists. Within her family, Marie-Denise was known as "Nisa." The family lived on the Rue Traversière-Saint-Honoré (today Rue Molière) near the Palais Royal in the 1st arrondissement of Paris. Little is known about Marie-Denise's childhood, however it is likely that through her much older sisters and cousin she would have been introduced to the salons of Paris. It was In the Paris Salon of 1799 that she met the artist Anne-Louis Girodet-Trioson, and also began to take painting lessons with François Gérard and Jacques-Louis David.

In 1794, she married an architecture student, Michel-Jean-Maximilien Villers. Her husband supported her art, during a time when many women were forced to give up professional art work after marriage. Her life between the time of her last dated painting (1814) and her death in 1821 remains unknown.

She first exhibited artwork at the Paris Salon of the Year VII (1799). Villers' most famous painting, Portrait of Charlotte du Val d'Ognes (1801) has been attributed to various artists and shown under a variety of titles through its long history. Originally, the portrait was in the du Val d'Ognes family for generations, where it had been attributed to Jacques-Louis David. When the Metropolitan Museum of Art bought it in 1917, it was known as "the New York David." However, in 1951 curator Charles Stirling hypothesized that it was actually painted by a "little known woman." For decades afterwards, it was stripped of its title and artist, as per the Met's policy. In 1995, Margaret Oppenheimer successfully argued that Villers painted the work. Furthermore, art historian Anne Higonnet argues that Young Woman Drawing is a self-portrait.

Villers exhibited Study of a young woman sitting on a window and two other works at the Salon of 1801, followed in 1802 by a genre painting entitled A child in its cradle and A Study of a Woman from Nature. Her last known work is a portrait of the Duchess of Angoulême, exhibited in 1814.