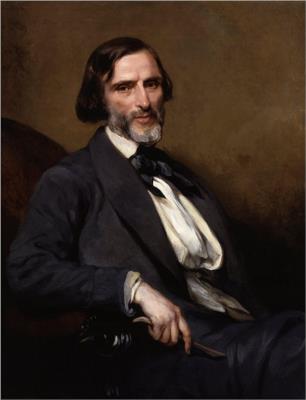 John Gibson RA (19 June 1790 – 27 January 1866) was a Welsh Neoclassical sculptor who studied in Rome under Canova. He excelled chiefly in bas-relief, notably the two life-size works The Hours Leading the Horses of the Sun and Phaethon driving the Chariot of the Sun, but was also proficient in monumental and portrait statuary. Gibson was elected a Royal Academician in 1836, and left the contents of his studio to the Royal Academy, where many of his marbles and casts are currently on display.

Gibson was born near Conwy, Wales, where his father was a market gardener. When he was nine years old the family were on the point of emigrating to America, but his mother put a stop to this plan on their arrival at Liverpool, where they settled, and where Gibson was sent to school. He became fascinated by the displays in the windows of the city's print shops. The painter and printseller John Turmeau lent him some drawings and plaster casts to copy.

At the age of fourteen, Gibson was apprenticed to a firm of cabinet-makers. He soon took a violent dislike to this work, however, and eventually managed to have his articles bought out by the monumental masons Samuel and Thomas Franceys. It was while apprenticed to the Franceys brothers that Gibson came to the attention of the historian William Roscoe, for whom he executed a terracotta bas-relief now in the Liverpool museum. Roscoe gave Gibson access to his library at Allerton, by which means he became acquainted with the designs of the great Italian masters.

A cartoon (now also in the Liverpool museum) of The Fall of the Angels marked this period. He studied anatomy, his lessons provided gratuitously by a medical man, and gained introductions to families of refinement and culture in Liverpool. Roscoe was an excellent guide to the his protegée, pointing to the Greeks as the only examples for a sculptor. Gibson here found his true vocation. A basso rilievo of Psyche carried by the Zephyrs was the result. He sent it to the Royal Academy, where John Flaxman, recognizing its merits, gave it an excellent place. Again he became unsettled. He conceived a wish to further his artistic education in Rome, and the first step to this goal went to go to London; there he received conflicting advice from Flaxman and from Francis Legatt Chantrey, the former urging him go to Rome as the highest school of sculpture in the world, the latter maintaining that London could do as much for him.

He arrived in Rome in October 1817, at a comparatively late age for a first visit. There he was generously received by Antonio Canova, to whom he had introductions, the Venetian sculptor putting not only his experience in art but his purse at the English student's service. Up to this time, though his designs show a fire and power of imagination in which no teaching is missed, Gibson had had no instruction, and had studied at no Academy. In Rome he first became acquainted with the rules and technicalities of art. Canova introduced him into the Academy supported by Austria, and the first sense of his deficiencies in common matters of practice was depressing to him. He saw Italian youths already excelling in the drawing of the figure. But the tables were soon turned. His first work in marble, Sleeping Shepherd Boy, was completed in 1824.