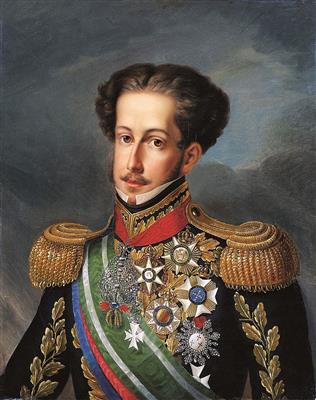 Simplício de Sá was a painter and professor born in Cape Verde, but who stablished his life and carreer in Brazil.
A follower of Jean-Baptiste Debret, came to Brazil in 1916 by request of the master and was part of the Missão Artística Francesa (French Artistic Mission) and helped to create the Academia Imperial de Belas-Artes (Imperial Academy of Fine Arts).
Simplício de Sá had great importance among the Imperial Family of Brazil, being the drawing and painting mentor of D. Pedro II (second emperor of Brazil), D. Maria da Glória (queen of Portugal) and also of the Empress D. Leopoldina.
He died by the age of 54 in Rio de Janeiro, where he lived through most of his life.


He studied in Lisbon and emigrated to Rio de Janeiro in Brazil in 1809. Seven years later, he became a follower of Jean Baptiste Debret, joining his group, the French Artistic Mission and helping to lay the foundations for what would become the Academia Imperial de Belas Artes in 1826.


He was also named a court painter and a private art tutor to Princess Maria da Glória, the future Queen of Portugal. For his services, Emperor Pedro I awarded him the Order of Christ in 1826, and named him a Knight in the Order of the Southern Cross. In 1831, when Debret returned to Paris, De Sá took his place as head of the History Painting Department at the Imperial Academy.


In 1833, he became drawing master for the child-Emperor Pedro II and his sisters. After the death of Henrique José da Silva [pt] in 1834, he took over the Department of Design at the Academy. He also organized the first two major public exhibitions held there, in 1829 and 1830, although his first solo exhibition appears to have been given posthumously.


He worked in several genres, including religious works for the Church of the "Ordem Terceira de São Francisco da Penitência", but is largely remembered as a portrait painter who focused on members of the Royal Family. He was apparently blind at the time of his death.