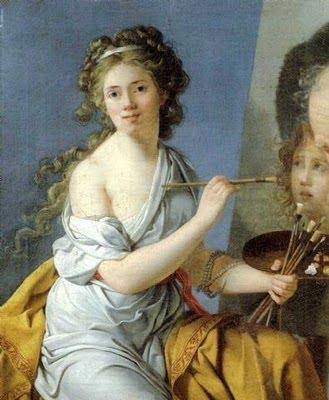 She was born in Paris, the daughter of a civil servant. Her training as an artist began in 1781 under Élisabeth Vigée Le Brun, and she entered Jacques-Louis David's atelier in 1786 along with her sister Marie-Élisabeth Laville-Leroux.

The poet Charles-Albert Demoustier, who met her in 1784, was inspired by her in creating the character Émilie in his work Lettres à Émilie sur la mythologie (1801).

In 1791 she exhibited for the first time in the Salon de Paris, displaying her mythology-inspired picture Psyché faisant ses adieux à sa famille. Another of her paintings of this period, L'Innocence entre la vertu et le vice, is similarly mythological and reveals her feminist interests—in this picture, vice is represented by a man, although it was traditionally represented by a woman. In 1793, she married the lawyer Pierre-Vincent Benoist.

Her work, reflecting the influence of Jacques-Louis David, tended increasingly toward history painting by 1795. In 1800, she exhibited Portrait d'une négresse in the Salon. Six years previously, slavery had been abolished, and this image became a symbol for women's emancipation and black people's rights. The picture was acquired by Louis XVIII for France in 1818.

An important commission for a full-length portrait of Napoléon Bonaparte—Premier Consul Français in this period—was awarded to her in 1803. This portrait was to be sent to the city of Ghent, newly ceded to France by the Treaty of Lunéville in 1801. Other honors came to her; she was awarded a Gold Medal in the Salon of 1804, and received a governmental allowance. During this time she opened an atelier for the artistic training of women.

Her career was harmed by political developments, however, when her husband, the supporter of royalist causes, Count Benoist, was nominated in the Conseil d'État during the post-1814 Bourbon Restoration. Despite being at the height of her popularity, she chose to relinquish her career, both in painting and pursuing women's causes, due in part to her devoir de réserve or "tactful withdrawal" in English, in the face of the growing wave of conservatism in European society.