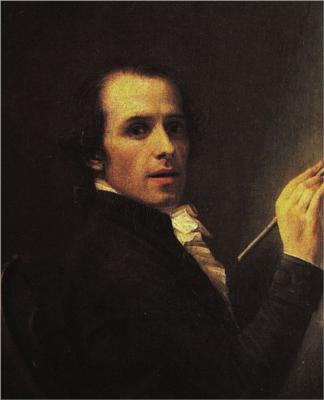 Antonio Canova (Italian pronunciation: [anˈtɔːnjo kaˈnɔːva]; 1 November 1757 – 13 October 1822) was an Italian Neoclassical sculptor, famous for his marble sculptures. Often regarded as the greatest of the Neoclassical artists, his artwork was inspired by the Baroque and the classical revival, but avoided the melodramatics of the former, and the cold artificiality of the latter.

In 1757, Antonio Canova was born in Possagno to Pietro Canova, a stonecutter. In 1761, his father died. A year later, his mother remarried. As such, in 1762, he was put into the care of his paternal grandfather Pasino Canova, who was a stonemason, owner of a quarry, and was a "sculptor who specialized in altars with statues and low reliefs in late Baroque style". He led Antonio into the art of sculpting.

Before the age of ten, Canova began making models in clay, and carving marble. Indeed, at the age of nine, he executed two small shrines of Carrara marble, which are still extant. After these works, he appears to have been constantly employed under his grandfather.

In 1770, he was an apprentice for two years to Giuseppe Bernardi, who was also known as 'Torretto'. Afterwards, he was under the tutelage of Giovanni Ferrari until he began his studies at the Accademia di Belle Arti di Venezia. At the Academy, he won several prizes. During this time, he was given his first workshop within a monastery by some local monks.

The Senator Giovanni Falier commissioned Canova to produce statues of Orpheus and Eurydice for his garden – the Villa Falier at Asolo. The statues were begun in 1775, and both were completed by 1777. The pieces explify the late Rococo style. On the year of its completion, both works were exhibited for the Feast of the Ascension in Piazza S. Marco. Widely praised, the works won Canova his first renown among the Venetian elite.

In 1779, he opened his own studio at Calle Del Traghetto at S. Maurizio,. At this time, Procurator Pietro Vettor Pisani commissioned Canova's first marble statue: a depiction of Daedalus and Icarus. The statue inspired great admiration for his work at the annual art fair; Canova was paid for 100 gold zecchini for the completed work. At the base of the statue, Daedalus' tools are scattered about; these tools are also an allusion to Sculpture, of which the statue is a personification. With such an intention, there is suggestion that Daedalus is a portrait of Canova's grandfather Pasino.

Canova arrived in Rome, on 28 December 1780. Prior to his departure, his friends had applied to the Venetian senate for a pension. Successful in the application, the stipend allotted amounted to three hundred ducats, limited to three years.

While in Rome, Canova spent time studying and sketching the works of Michelangelo.

In 1781, Girolamo Zulian – the Venetian ambassador to Rome – hired Canova to sculpt Theseus and the Minotaur. The statue depicts the victorious Theseus seated on the lifeless body of a Minotaur. The initial spectators were certain that the work was a copy of a Greek original, and were shocked to learn it was a contemporary work. The highly regarded work is now in the collection of the Victoria & Albert Museum, in London.