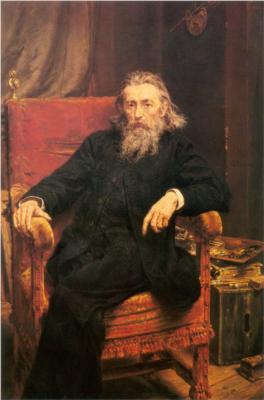 Jan Alojzy Matejko (Polish pronunciation: [jan aˈlɔjzɨ maˈtɛjko] ( listen); also known as Jan Mateyko; June 24, 1838 – November 1, 1893) was a Polish painter known for paintings of notable historical Polish political and military events. His works include large oil on canvas paintings like Rejtan (1866), Union of Lublin (1869) or Battle of Grunwald (1878), numerous portraits, a gallery of Polish kings, and murals in St. Mary's Basilica, Kraków. He is referred to as the most famous Polish painter or even the "national painter" of Poland.

Matejko spent most of his life in Kraków. His teachers at the Kraków Academy of Fine Arts included Wojciech Korneli Stattler and Władysław Łuszczkiewicz. Later, he became a director at this institution, which eventually was renamed the Jan Matejko Academy of Fine Arts. A number of his students became prominent painters themselves, including Maurycy Gottlieb, Jacek Malczewski, Józef Mehoffer and Stanisław Wyspiański.

Matejko was born on June 24, 1838, in the Free City of Kraków. His father, Franciszek Ksawery Matejko (Czech: František Xaver Matějka) (born 1789 or January 13, 1793, died October 26, 1860), a Czech from the village of Roudnice, was a graduate of the Hradec Králové school who later became a tutor and music teacher. He first worked for the Wodzicki family in Kościelniki, Poland, then moved to Kraków, where he married the half-German, half-Polish Joanna Karolina Rossberg (Rozberg). Jan was the ninth child of eleven children. He grew up in a kamienica building on Floriańska Street. After the death of his mother in 1845, Jan and his siblings were cared for by his maternal aunt, Anna Zamojska.

At a young age he witnessed the Kraków revolution of 1846 and the 1848 siege of Kraków by the Austrians, the two events which ended the existence of the Free City of Kraków. His two older brothers served in these battles, under General Józef Bem; one died and the other was forced into exile. Matejko attended St. Ann's High School, but he dropped out in 1851 because of poor grades. From his earliest days Matejko showed artistic talent, but had great difficulty with other academic areas. He never mastered a foreign language. Despite that, and because of his exceptional skill, he studied at the School of Fine Arts in Kraków from 1852 to 1858. His teachers included Wojciech Korneli Stattler and Władysław Łuszczkiewicz. He selected historical painting as his specialization, and finished his first major work, Tsars Shuyski before Zygmunt III (Carowie Szujscy przed Zygmuntem III), in 1853 (he would return to this topic in a year before his death, in 1892). During this time, he began exhibiting historical paintings at the Kraków Society of Friends of Fine Arts (starting with 1855). His seminal project for his graduation in 1858 was Sigismund I the Old ennobles the professors of the Jagiellonian University (Zygmunt I nadaje szlachectwo profesorom Uniwersytetu Jagiellońskiego).

After graduation, Matejko received a scholarship in 1859 to study with Hermann Anschütz at the Academy of Fine Arts, Munich. The following year he received a scholarship to study at the Academy of Fine Arts Vienna as well, but after a few days and a major quarrel with Christian Ruben, Matejko returned to Kraków. and opened a studio at his family home in Floriańska Street. It would however be years before he would gain commercial success; for a time he was the proverbial "starving artist", who celebrated when he sold a canvas (the Tsars Shuyski...) for five gulden.