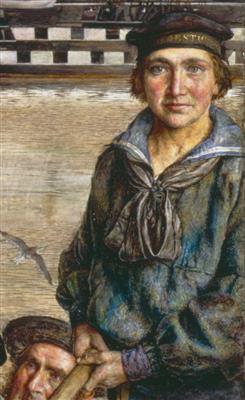 John Lee (active 1850–1870) was a pre-Raphaelite British painter; part of a group of Merseyside artists from the period which also included William Lindsay Windus and William Davis. The son of Liverpool merchants, he lived in Rock Ferry before moving to London in 1866. His works were shown at the Liverpool Academy from 1859–67 and at the Royal Academy from 1863–67. However, little else is known of his life, and only four paintings have been attributed to him with any certainty.

Sweethearts and Wives, 1860, is considered Lee's masterpiece. It has been suggested that the rightmost sailor is a self-portrait of John Lee. The work is a typical dockside scene, which depicts sailors on the Liverpool docks going out to duty on the HMS Majestic, which served as part of the harbour defences, and visible anchored in the middle of the Mersey.