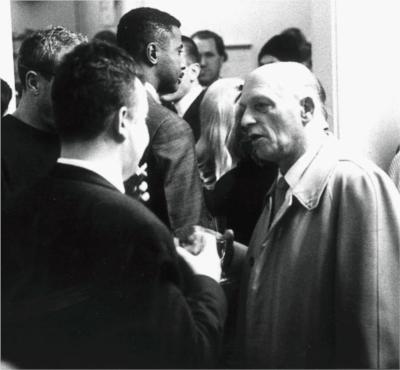 Adolf Richard Fleischmann (18 March 1892 - 28 January 1968) was a German abstract painter. His late work evolved into constructivism; he is considered a precursor of Op Art.

Fleischmann was born in Esslingen am Neckar, the third child of businessman, Wilhelm Adolf Fleischmann, and his wife Paulina Maria (born 18 March 1892 in Esslingen).

After graduation he studied from 1908 at the Kunstgewerbeschule in Stuttgart, and in 1911 moved to the Royal Academy of Arts, where he studied with Adolf Hoelzel and Robert Poetzelberger.

After a brief spell as a staff illustrator and painter in the Municipal Office of Health Care Exhibition, Stuttgart, and at the workshop on graphic art under Paul Hahn Fleischmann, in 1914 he was drafted into military service. The following year he was on the Eastern Front and so badly wounded, that he was discharged from military service.

Temporarily, he designed book covers for Deutsche Verlags-Anstalt, and the JB Metzler's Verlagsbuchhandlung, both in Stuttgart.

Through the intercession of his half-sister Louise Lotte Volger, who was employed as Moulageuse at the Cantonal Hospital of Zurich, in 1917 he received a job there. Fleischmann worked until July 1928 (with interruptions) as a scientific illustrator in Zurich. Many of the products manufactured by him in plaster casts are preserved and on display at the University Hospital of Zurich.

In 1921, Fleischmann participated in the exhibition of the New Munich Secession. Here he was particularly inspired by Franz Marc and other Expressionists. As a result, he drew expressionist paintings.

This was followed by work trips to Italy, Spain, Switzerland, Paris, but also in Germany (Berlin and Hamburg). In 1925, he was influenced by cubism. In 1928, he took part in the "Juryfreien" exhibitions in Stuttgart and Berlin, and again participated in the "New Secession", Munich.

Since he was now producing abstract painting, he avoided a possible confrontation with the National Socialist regime by moving to France. In Paris, he joined the "Équipe" group. In this way he met influential artists, such as Robert Delaunay and Albert Gleizes. There, he helped the Resistance against the German occupiers. By the end of the war, he lived in various places in southern France, especially in Graulhet, Tarn (department). Several times he was interned, then in camp, "Les Milles" in Aix-en-Provence, from which he managed to escape, in October 1940.

At the end of 1944, Adolf Fleischmann returned from his hideout in southern France back in liberated Paris, where he found a completely devastated studio, with only remnants of his paintings, the work of many years. He literally, "I experienced a nervous breakdown." But with the help of his French friends, he could soon begin his artistic work again, and get involved until his emigration to the U.S. in 1952, participated in exhibitions in Paris. Under the pressure of a violent anti-German feeling, he signed in the early postwar period works with the pseudonym Richard, his middle name. In the catalog of Realitéts Nouvelles No. 1, 1947, is a picture of him. He did not use the pseudonym of Richard in the United States.