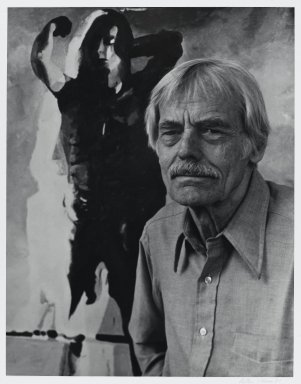 Balcomb Greene (1904–1990) and his wife, artist Gertrude Glass Greene, were heavily involved in political activism to promote mainstream acceptance of abstract art. They were founding members of the American Abstract Artists organization. His early style was completely non-objective. Juan Gris and Piet Mondrian as well as Pablo Picasso and Henri Matisse influenced his early style. From the 1940s his work "opened out to the light and space of natural form." He painted landscapes and figure. "He discerned the pain of a man, and hewed to it integrally from beginning to end…. In his study of the figure he did not stress anatomical shape but rather its intuitive, often conflicting spirit."

Balcomb Greene contributed to modernist cause through his writings: "It is actually the artist, and only he, who is equipped for approaching the individual directly. The abstract artist can approach man through the most immediate of aesthetic experiences, touching below consciousness and the veneer of attitudes, contacting the whole ego rather than the ego on the defensive."

Soon after his return to New York in 1933 he realized that his true interest was painting. He started "to work for the Emily Francis Contemporary Gallery, a non-profit organization that showed particular interest in American artists and had exhibited the work of Bradley Walker Tomlin and Mark Tobey." In 1935 he became the first president of the Artists Union and in 1936 the first chairman of the American Abstract Artists (AAA). In the late 1930s he was employed by the New York mural division of the Federal Art Project (WPA), and completed abstract murals for the Williamsburg Houses (Brooklyn Museum, on long-term loan from the New York City Housing Authority) and the Public Health Building of the 1939 New York World's Fair (destroyed). Also in 1939 and 1941 he was reelected as chairman of American Abstract Artists, but resigned from that organization in 1942, when he began a career as a professor of art history and aesthetics.

After receiving his master's degree in art history (New York University, 1943), Greene taught at Carnegie Institute of Technology, Pittsburgh, while also continuing to pursue a career as an artist. Gertrude Greene stayed in New York, and the couple shared a studio on Montauk, Long Island, during summer breaks. Greene worked alone to pursue his solitary style but at the same time he was familiar with the Abstract Expressionist movement. He wrote in Art News, "The Fourth Illusions, or Hunger for Genius" "A picture is painted of modern art that arranges all participants into movements, like well-behaved Englishmen in clubs." In spite of his conviction he agreed to participate in the invitational New York Painting and Sculpture Annuals organized by the New York School artists in 1954, 1955 and 1957. In 1972 he was elected into the National Academy of Design as an Associate member.